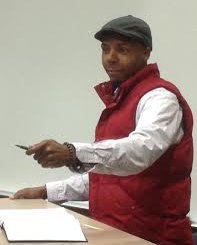 A Workers World forum celebrating Black History Month was held at Malcolm X College in Chicago on Feb. 7. The forum called for an end to the war on youth, including racist police terror and low-wage slavery.

Lamont Lilly from the Workers World Party branch in Durham, N.C., made opening remarks that engaged students in a lively discussion of what circumstances currently exist for youth of color, and all youth in poor and working-class communities. He tied together the current lack of jobs and support for students with the violence perpetrated by the police.

One student spoke at length about a recent incident with police involving a profiled stop and search of her car. This has resulted in felony charges against her, seizure of her car and costly legal expenses. She is a daycare worker who had not been paid in a month because Illinois ran out of Daycare Action funds. This was a perfect example of how police harassment of young people of color, trying to work low-wage jobs and go to school, have their lives thrown into financial and legal chaos.

Tommy Cavanaugh from “Fight Imperialism, Stand Together” (FIST) in nearby Rockford, Ill., spoke about the struggle of low-wage youth workers and the need for a livable minimum wage. He documented the current plight of young workers of color and the undocumented. The extremely low pay of this workforce lowers wages for workers in general, so solidarity and unionization of all workers is most important.

Abayomi Azikiwe from Detroit, the editor of Pan African News Wire and a contributing editor to Workers World newspaper, couched the current struggle against police terror within the history of the Black Liberation Movement. He traced the teaching of Malcolm X from his departure from the Nation of Islam to the formation of the Organization for Afro-American Unity and his goal to build a movement that included recognition of internationalism.

Kye K from Malcolm X College encouraged students to get involved in the current “Black Lives Matter” activities. She talked about the inspiration that becoming politically active has brought to her life. The meeting was followed by a lively discussion with many comments from the audience.