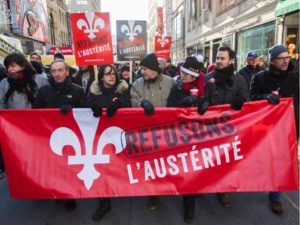 Around a thousand people protested the Quebec government’s austerity program in front of the National Assembly in Quebec City on Feb. 12, the day the parliament opened its 2015 session.

Back in November, the coalition had organized major protests involving tens of thousands of people in Montreal and other Quebec cities. And on Feb. 6, when Quebec Premier Philippe Couillard went to Abitibi-Témiscamingue, a small city in the western part of the province, over 200 protesters showed up in snowy, harsh cold to say that he shouldn’t cut jobs, health and other social services and education.

Some 500 militants from the Federation of Health and Social Services, a component of the Confederation of National Unions (CSN), occupied the offices of 16 members of the National Assembly during the week leading up to the Feb. 12 conference and protest. [“National” in these names refers to Quebec, not to Canada.]

The National Assembly is considering a law, PL10, that would drastically cut health care services. For example, the Côte-nord — the north shore of the Gulf of St. Lawrence, between Saguenay Fjord and Labrador, the second-largest region of Quebec — would be reduced to just one health center for 146,000 square miles. (refusons.org)

Besides the CSN, another significant member of Let’s Refuse Austerity is the Association of Student Union Solidarity (ASSE), one of the leaders of a successful and militant student strike in 2012 that brought thousands of students into the streets for protests that lasted for months.

A spokesperson for ASSE said at a press conference on Feb. 12 that the students would engage in “economic disruptions,” including blocking bridges, as they did in 2012. Camille Godbout, their spokesperson, said they would not rule out any tactic. (Huffington Post Quebec) The ASSE is also calling for actions Feb. 23-27, as well as supporting the other mobilizations.

Daniel Boyer of the FTQ said the government has chosen the wrong strategy. Rather than austerity, it should look to increase revenue.

Boyer charged that the government was attacking the poorest members of Quebec society and cutting social programs built up over decades. (Radio Canada, Feb. 12)

Jacques Létourneau, president of the CSN, claimed that Premier Couillard was “playing with words” when he claimed that “Quebec’s government will work out a plan for economic growth in the next few weeks.”

The fall of oil prices has caused major economic difficulties in Canada, especially in the Western provinces. Canada’s currency has slipped by 20 percent in relation to the U.S. dollar. However, while Quebec has to pay more for imports, its exports are more valuable.

Quebec in many ways is a distinct society inside Canada. A majority of Quebec’s residents speak French. The immigrants it attracts are mainly from places like Haiti and North Africa, where French is a common second language. It has a historical trajectory that is unique in Canada, going from a conquered province to a recognized part of Canada.

Its union movement grew up and struggled hard not just in the major cities of Montreal and Quebec, but also in the woods and in small isolated settlements, where unions provided the only protection workers had against the Catholic Church and local banks.

Relying on deep traditions of solidarity, the union movement and progressives in Quebec are trying hard to build a movement to defeat austerity. pan>