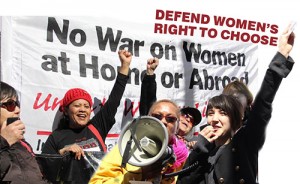 An outrageous miscarriage of justice occurred Feb. 3 in Indiana based on a real miscarriage. Purvi Patel, a 33-year-old, unmarried woman of South Asian-American descent, was found guilty of two contradictory crimes: feticide and neglect of a child. In March she could be sentenced to 70 years in prison.

On July 13, 2013, Patel went to the emergency room at St. Joseph Hospital in Mishawaka, Ind., with heavy bleeding after delivering a stillborn fetus and depositing the remains in a bag in a dumpster.

After questioning by medical personnel, police homicide detectives interrogated Patel and found, after searching her home and mobile phone, that she had obtained drugs from Hong Kong which she took in an attempt to abort the fetus. That led to the charge of feticide, even though blood tests revealed no such drugs in her system.

The charge of neglect of a child was based on what can only be called “junk science.” The court pathologist used a “whole lung float test” to determine that the baby was born alive. But, according to RH Reality Check senior legal analysts Jessica Mason Pieklo and Imani Gandy, who discussed the case in a Feb. 9 podcast, that “test has been discredited since the 1980s.” Besides, Patel testified that the fetus was not breathing when it was expelled from her body.

Yet a jury took only five hours to deliver a guilty verdict on both counts. That means the jury discounted testimony absolving Patel of both charges and believed she was criminally liable for wanting to self-abort an unexpected pregnancy.

How could this happen in the U.S. in 2015? How could a fetal homicide law intended to protect an unborn child be turned upside down to apply to a pregnant woman? According to Indiana attorney Kathrine Jack, the feticide law, initially used to prosecute illegal abortion providers, was later expanded to cover men who were violent with pregnant partners. It was never “intended to apply to pregnant women. … To use feticide charges in this way is bad for public health. Women will become afraid to go to their doctors for fear of arrest.” (Guardian, U.K., Aug. 26)

This criminalization of pregnancy could be repeated in 38 states that currently have fetal homicide laws. Alabama, Mississippi and South Carolina have already sent mothers to jail — mostly for abusing drugs or alcohol while pregnant.

A peer-reviewed study published in 2013 by the National Advocates for Pregnant Women documented 413 arrests or other police actions that denied pregnant women of “physical liberty” between 1973, when Roe v. Wade was decided, and 2005. Since 2005, NAPW has identified an additional 380 cases, with more every week. Data reveal that targets of so-called “pro-life” laws are predominantly low-income women and women of color. (­advocatesforpregnantwomen.org, Feb. 4)

Patel, a woman of color who had a relationship with a married man, lived in a strict Hindu community where sex before marriage and a baby born out of wedlock were taboo. Patel, who may have felt deep shame, had very little knowledge of menstruation and pregnancy since no sex education is provided in Indiana schools. She had no prenatal care and only limited access to costly abortion services.

RHRC legal expert Pieklo noted that the prosecution, rather than sticking to concrete evidence, made “assumptions about how an appropriate mother behaves. … They said that [Patel] didn’t cry enough, that she was having a difficult time looking doctors in the eye when she was talking to them, that she was very cold in her demeanor. They spun that to say she was a murderer. [But] those are also classic trauma symptoms.”

It is an understatement that cultural issues separated Patel from the jury.

“This case and the verdict should send shockwaves through everyone who has an opinion about the right to choose abortion,” reads the NAPW statement. Because the state of Indiana did not prove Patel gave birth to a live baby who was then neglected, but did “set precedent for harsh punishment of women who have abortions or experience pregnancy losses,” NAPW will support an appeal of the case.

But this travesty of justice should never have come to trial. Patel should not have been forced to endure the intense public humiliation of a very private, exceedingly personal experience.

Misogyny on steroids characterizes today’s dead-end capitalism. It seeks to terrorize and criminalize poor, working-class women, especially from oppressed nationalities, as well as all other “outsiders” in this society, in a desperate attempt to keep the wealthy, white, male ruling class intact. The only solution to guarantee reproductive justice for all women is a revolution that eventually establishes a compassionate, classless society.