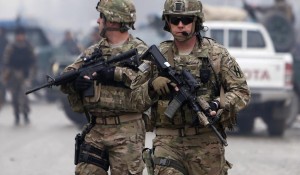 Capitalist crises engender war. To the profiteers, war spoils and the selling of war materiel are the answer to sagging markets and declining production.

The war drive of U.S. imperialism has kicked up a notch even as we write. Long U.S. wars in Afghanistan and Iraq created horrendous conditions for the people there. Now much of the Middle East is in flames, with all the Western imperialists, Washington leading the pack, trying to grab a piece of the action.

By pouring in weapons and money against secular postcolonial governments, from Iraq to Syria to Libya, the U.S., its NATO allies and Israel have spawned mercenary armies of every stripe that are beholden to the imperialists and their collaborators. Now the enemy, at least for the purposes of war propaganda, is “Islamic terrorism” — which U.S. intervention helped to create.

But selling weapons and forcing open markets are not enough for U.S. warmakers. They foresee the further disintegration of their global empire and are laying the basis for bigger wars.

Thus the Obama administration, which gets its marching orders from Wall Street just as the Republicans do, is seeking broader powers for the president to make war without actually declaring it. Called “Authorization for the Use of Military Force,” it would make official what has become almost routine: the president’s ability to sidestep Congress and carry out aggression.

The AUMF would include not just setting up proxy armies but authorizing U.S. troops on the ground. Where will they intervene next? In Ukraine, if the right-wing, U.S.-created regime in Kiev can’t subdue rebellious forces in the east seeking autonomy? Washington is already talking about sending Ukraine heavy weapons.

Or maybe Libya? The parliament of Italy, the former colonial power in Libya, is already talking of sending troops under United Nations aegis. Egypt’s generals, who blasted back to power with Washington’s blessings in 2013, are already bombing there.

The Democrats have long been associated with starting wars, especially wars with “humanitarian” pretexts. Republicans find other pretexts, isolationist rhetoric aside. House Speaker John Boehner’s invitation to Israel’s Netanyahu made clear that Republicans want war against Iran. And Sen. John McCain, who got shot down terror-bombing Vietnam and built his political career on being caught, calls for direct U.S. intervention in Ukraine.

What can stop this grim trajectory? Making resistance to militarism part of every social struggle. Jobs and justice, not racism and war!