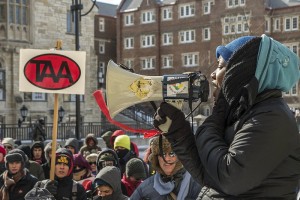 Brandi Grayson of the Young, Gifted and Black Coalition, speaking to hundreds of protesters at the state Capitol in Madison, Feb. 14.
Photo: Joe Brusky

Walker wants to cut a minimum of $300 million from the 26-campus University of Wisconsin system — attacking faculty, staff, students and their communities.

Walker’s aggressive campaign against unions, the public sector and communities of color has already won him support from the big financial and industrial capitalists who control U.S. politics, as reflected in speculation that he could be a 2016 Republican contender for president.

Walker calls his proposals “Act 10,” after the Jim Crow austerity law that drew hundreds of thousands of labor, community and student protesters from around the world to the state Capitol in Madison in 2011. 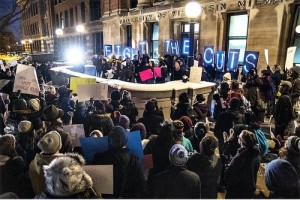 Act 10 cut wages for public sector workers by increasing health care and pension payments, eliminated payroll dues deductions for public sector unions and forced the unions to annually secure the votes of 51 percent of the entire bargaining unit, not just of those who voted. Among other union-busting provisions, it mandated that, if certified, these unions could only bargain over wages up to the rate of inflation.

As a result, membership in public sector unions, such as the American Federation of State, County and Municipal Employees, plummeted to the lowest level in 20 years, health and safety measures have declined, privatization has taken place in the university system, and poverty — especially for children and communities of color — has skyrocketed. (wccf.org)

In the 2011-13 state budget cycle, the largest cuts to the UW system in history took place. K-12 public education was also subjected to massive cuts, while charter schools were increased.

State support for public education has greatly declined in Wisconsin over three decades, under both the Democrats and the Republicans. Skyrocketing tuition and student debt make access to higher education increasingly out of reach for poor and working-class families.

Attacks on public education and the unions have a disproportionate effect on people of color, women and the lesbian, gay, bisexual, transgender and queer communities even as services and policies such as affirmative action, resource centers and cultural programs are reduced and/or eliminated.

The implementation of Act 10 has cut the power of public sector unions, such as AFSCME and the American Federation of Teachers, on UW campuses. Along with hundreds of millions of dollars in budget cuts, privatization of administrative services has increased, with possibly grave consequences to the Wisconsin Retirement System, a defined-benefit pension system. The capitalists and their servants like Walker want to take away even more from the people and hand it over to the banks and bondholders.

In the fall of 2014, UW-Superior and UW-Wausau privatized their custodial services. The new hires receive as little as $8 an hour, with inferior and more costly benefits. As private sector employees, they are no longer in the state health and retirement systems. (wseu-24.org)

As of last July 1, all two-year colleges in the UW system and one four-year college had privatized all the formerly campus-owned bookstores.

Many union manufacturing jobs in Wisconsin were decimated by a combination of the North American Free Trade Agreement, multiple forms of outsourcing and replacing workers with technology in this era of dead-end capitalism. Black workers have taken the brunt of the unrelenting capitalist austerity, with the highest percentage of incarceration, one of the highest infant mortality rates and thousands of home foreclosures in Milwaukee.

Classified staff jobs in the UW system are often the only living-wage opportunities available — with such benefits as state health insurance and a pension — for women and workers of color in urban, rural and semi-rural areas. Many campus administrators who are either capitalists themselves or sympathetic to running universities like banks and corporations have expressed willingness to go along with the “restructuring” of the UW system.

But outrage and resistance are building statewide.

‘They say cut back. We say fight back!’

On Feb. 4, the day after Walker’s gubernatorial address, hundreds of students at UW-Milwaukee protested his proposed cuts to the university system. With community, staff and faculty support, protesters marched through the student union and rallied at Spaights Plaza to demand, “No ifs, no buts, no education cuts!”

Members of the Progressive Students of Milwaukee unveiled a banner over a third-floor railing that read: “They say cut back. We say fight back! No cuts to UW.”

In the evening, hundreds more protested. The administration responded by calling out campus and Milwaukee police. (fightbacknews.org). Another mass protest took place at UWM on Feb. 7.

On Feb. 6, students, faculty, labor and community members — carrying signs reading, “No cuts, no layoffs, no privatization” and chanting, “Hey, hey, ho, ho! Walker’s cuts have got to go!” — gathered outside the UW Board of Regents’ meeting in Madison. Board members, most of whom come from banking and corporate interests, barred them from the public meeting.

The same day, the Milwaukee Teachers Education Association held a community strategy session that drew over 400 public educators and their supporters.

Protests have also taken place at UW-Eau Claire and other locations.

On Feb. 14, in subzero temperatures, hundreds protested at the state Capitol in Madison. Speakers included faculty, staff, students and community members, including “Young, Gifted and Black” Coalition leader Brandi Grayson, who linked the struggles of the the “Black Lives Matter” movement to the fight to fully fund public education.

The Wisconsin Bail Out the People Movement put out a statement titled “Fight austerity! Fight the banks and corporations! Education is a human right! Build a global people’s movement!” (http://tinyurl.com/owwcegk).

Bryan G. Pfeifer is a UW-Manitowoc and UW-Milwaukee alumnus. He was editor-in-chief of the UWM Post and co-coordinator of the Progressive Student Network at UW-Milwaukee.