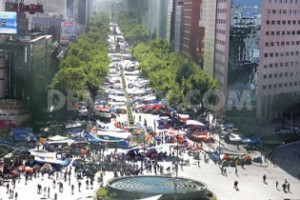 Mexico City — Some 10,000 teachers converged on Mexico City on Feb. 9, and immediately set up hundreds of tents in the intersection of the city’s main avenues: Insurgentes, Paseo de la Reforma and Bucareli.  Their occupation demanded higher salaries and payment of wages owed, government funding for public education and an end to state terrorism.

The National Coordination of Educational Workers (CNTE), the national union of teachers based in Oaxaca, organized this demonstration.  The largest contingent was from Oaxaca, but teachers came from all over the country, including a delegation from the Yaqui Indigenous group of northern Mexico.

As chartered buses dropped the teachers off close to Mexico City’s landmark Monument to the 1916 Revolution, 2,700 city police and 800 federal police, armed and helmeted and with shields, lined the streets leading to the city’s central square, the Zócalo.  This site was the scene of the months-long protest in 2006 against the fraudulent election of Felipe Calderón, who stole the election from Andrés Manuel López Obrador of the Democratic Revolutionary Party (PRD).

Oaxaca’s teachers were leading participants in the demonstrations that shook that state in 2006, and were again on strike in 2013.  Determined to stop the teachers from attempting to take over this public space as they did in 2013, the repressive forces of the state presented a daily visible threat.

Sit-in participants in Mexico City’s center raised banners calling for an end to state terrorism and elaborating on this message to say, “If there is no peace for the people, there will be no peace for the government.”  Other banners voiced solidarity with the 43 disappeared students in the state of Guerrero, known as the 43 of Ayotzinapa.  The same sentiment was expressed on banners hung in front of union halls throughout the city, including at the national union of telephone workers.

The union leadership announced on the evening of Feb. 10 that it had reached an agreement with the federal and state governments for a raise in teachers’ salaries and a settlement of back pay owed to teachers from Oaxaca for the last year up to and including January 2015.

As the teachers packed up tents and loaded buses on Feb. 11, Section 22 of the CNTE was already planning a mass meeting in Oaxaca for Feb. 14 to pursue their demands for better conditions and an end to the Education Reform Act of 2013. This act includes compulsory performance-based tests for teachers and could result in mass layoffs due to the decrepit state of many rural Indigenous schools.

According to the Feb. 10 issue of Excelsior, the leading Mexican newspaper, 48 percent of Indigenous primary schools in the state of Puebla have no bathrooms; 31 percent have no running water; and 46 percent lack drainage.

Although leading headlines in the daily press blamed teachers for abandoning their classes for three days during the sit-in, all evidence shows that the Mexican government has abandoned the education of poor and working-class children and youth.  It is these courageous teachers who are leading the struggle for this basic right for all children.