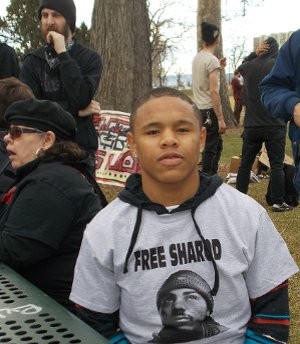 A demonstration of over 400 young people took to the streets of Denver on Feb. 14.  They blocked the main downtown streets and intersections, stopping at the detention center, the court buildings and the Denver Police Department to shout their anger and to demand justice for the dead and the two survivors who remain in jail.

Police kept their distance from the angry crowd of youth and the many supporters and families of the victims.

The crisis point came after a long history of Denver police beatings and use of excessive force when, on Jan. 26, Jessie Hernandez, a 17-year-old gender-nonconforming Latina, was shot to death. This was the fourth shooting by Denver police into a moving car, an action which is illegal according to police policy.

There have been multiple versions of the shooting sent out by the police department, but the charges of speeding and eluding police were dropped. The surviving occupants of the car said that Jessie was shot and only then did the car go out of control.  Jessie’s family has asked for a federal investigation due to their mistrust of the Denver police and prosecutors. Jessie’s mother broke down as she spoke to the crowd about raising money to bury her child. The community distrusts the Denver Police Department’s many differing versions of the story and feels that Jessie was shot for being Latina and gender nonconforming. The mother made clear she is seeking a fair investigation and justice for the loss of her child as she sobbed the words in Spanish. 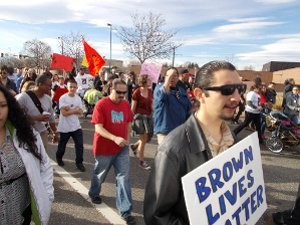 In July 2014, Ryan Ronquillo, 20 years old, was shot twelve times by Denver police as he sat in his car in front of a funeral home where services for his best friend were taking place. Denver police cars sped into the lot, crashing into his car. Then the police jumped out and shot Ryan to death.

In January 2015, Sharod Kindell had a clean record.  He had been working to buy a new car.  He was continually stopped and harassed by the police while driving the car, a total of 40 or 50 times. He sold the car, hoping to avoid further trouble but was again pulled over by the Denver police on Jan. 9. He gave them his ID.  He used his rights and refused to exit the vehicle and put his hands up for the police not to shoot.

The police opened the door of the car and while pulling him off the brake, the car rolled. Then the police shot him four times. He was seriously wounded but rapidly removed from the hospital ICU and sent back to jail. He now awaits trial.

The shouts of the demonstrators reached Sharod in the jail and caused great excitement as he called out to thank everyone. Sharod’s supporters are seeking to raise money for his bail and also to support his two daughters and other family members.

Lastly, two brothers, Joel Jurado, age 26, and Carlos Jurado, age 20, were shot and wounded as Denver police surrounded their car while they had their hands up to surrender. Carlos was released, but Joel remains in jail.

All the cases have a common thread. All the victims were young people of color. All involved police shooting into cars and all appear to involve one police officer, Jeffrey Di Manna, who currently remains on the job.  In all cases, the police tried to say the victims attempted to hit or run over the police despite differing statements by the victims and witnesses.

The Denver Police Department has a long, documented history of beating prisoners resulting in costly settlements for excessively using force and brutality.  A study in 2010 showed that the Denver police force used greater amounts of excessive force as compared with other U.S. cities.

Clearly, the recent anger has reached a tipping point as the Feb. 14 protest reflects.  There is a national scourge of police violence against youth of color in this country — in small towns like Ferguson and in major cities like New York, Cleveland, Los Angeles and San Francisco.

When the protesters marched past the police station on Feb. 14, two people were arrested after spilling red paint on a memorial for fallen police officers. The stone was quickly washed off, but police asserted to the Denver press that the act was disrespectful of the dead.  The Denver Community Defense Committee responded that no one complained of dishonoring the dead when Jessie Hernandez’s dead body, riddled with bullets, was handcuffed and dragged in the street.

Speakers said, “The people of Denver have run out of cheeks to turn” by a “system of police murders with complete immunity,” and no action has been taken by city officials “to stem the blood in the streets.”

This march was organized by the families of the victims, the Denver Defense Committee, Brothas Against Racist Cops, and supported by Anonymous, Occupy Denver and the Colorado Progressive Coalition, along with many other people, young and old, Latino/a and African American from Denver and statewide.