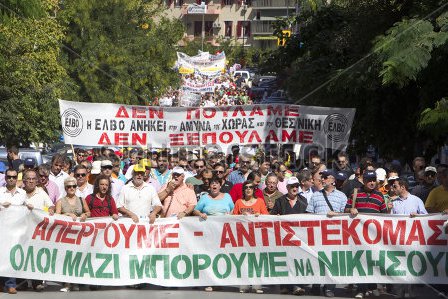 eb. 9 — A showdown in Greece in the struggle between the newly elected leftist Syriza government and the European bankers, who are trying to squeeze every last euro from the Greek masses, may come to a head Feb. 11-12 at meetings of the finance ministers in Brussels.

The bankers are taking a hard line while the Syriza government is pledging to reverse austerity. The bankers show absolutely no signs of backing down. Greek Prime Minister Alexis Tsipras, in his first speech to the Greek Parliament, strongly repeated his anti-austerity message, but also pledged to pay the loans and act within the norms of the eurozone.

“Greece wants to service its debt and invites its partners to join it in finding a way to work together,” he said. “It will comply with the rules of fiscal balance and a balanced budget but at the same time deal with social destruction, putting an end to austerity and a humanitarian crisis.” (Tsipras speech summarized in Business Insider, Feb. 8)

These aims — to conform to the rules of the bankers and at the same time to end austerity — are mutually incompatible. They are signs of either illusions or vacillation, or both, given the hard-line messages of the Berlin, Paris, Rome and London bankers, as well as all the other parasitic bankers who are sucking the blood of the Greek people and of all the people of southern Europe.

Already Syriza has silently dropped its demand for cutting the debt in half. In any case, the Syriza leadership is giving an ambiguous message that could confuse and disarm the Greek masses. Hopefully, Syriza will take a more consistent anti-austerity line at the upcoming Brussels meeting of ministers.

According to the Business Insider, Tsipras emphasized “tackling the big wounds of the bailout, tackling the humanitarian crisis. … After five years of bailout barbarity, our people cannot take any more.”

The anti-austerity measures that he pledged to follow included giving free food, electricity and health care to those worst affected by the economic crisis and ending an unpopular annual levy on small private property.

Among other commitments outlined in parliament were:

• Payment of a bonus to low-income pensioners.

• An end to privatization of public facilities.

Tsipras also demanded reparations from Germany for forced loans imposed on Greece during the Nazi occupation in World War II.

Tsipras also rejected any more bailout money. Greece is supposed to apply for 7.2 billion euros by Feb. 16 and receive it on Feb. 28. If Greece does not have enough money to pay 1.4 billion euros by March and 3.5 billion euros in June, it could default on its loans.

This, of course, has enraged the bankers. The European Central Bank has cut off  access of Greek banks to cheap loans.

The Syriza government is asking instead for a bridge loan to be able to pay debts until negotiations can be worked out. The ECB has refused, saying the only money Greece can get is bailout money, with all conditions of austerity attached.

Greece at Brussels: ‘One versus 18’

At the coming meetings in Brussels, the Greek government, which owes 320 billion euros ($360 billion) to the bankers, is supposed to present a financial plan that will allow the government to keep its promises to end austerity.

The bankers have already signalled a hard line. The ECB has told Greece not to expect any concessions at the Feb. 11-12 meetings.

At a preliminary meeting between Greek Finance Minister Yanis Varoufakis and all the other finance ministers in Brussels last week, “It was Greece against all others, basically one versus 18,” one official said, describing the discussions. (Reuters, Feb. 5)

Washington and Wall Street have tried to maintain a low profile during this crisis. But the U.S. government quietly made its position known.

“The U.S. urged Greece to exercise fiscal prudence and continue structural reforms in meetings between U.S. Treasury Department Assistant Secretary Daleep Singh, Varoufakis and other Greek officials in Athens Friday, the U.S. Embassy said in a statement on its website.

“‘The United States believes that it is very important for the Greek government to work cooperatively with its European colleagues, as well as with the [International Monetary Fund],’ U.S. Ambassador to Greece David Pearce said in the statement.’” (Bloomberg News, Feb. 8)

Not discussed is that the U.S. is the dominant force in the IMF, which, along with the ECB, is one of the two primary forces imposing austerity on Greece.

Alan Greenspan, former head of the U.S. Federal Reserve Board, predicted, according to the BBC, that Greece would have to leave the eurozone. It is not known whether this is a warning or a threat in the guise of a prediction. But in any case, it points up the dangerous situation that the Greek government and the Greek workers, peasants and middle class are facing.

Pointing to challenges, mobilizing for struggle

In fact, breaking with the euro would be a step toward ending the debt slavery Greece is in. But it also sets the stage for economic aggression by the world capitalist investors and severe economic hardship. Economic strangulation could only be answered by strong working-class measures to fight back.

With the Brussels meeting coming up, it is urgent to tell the workers of the potential dangers ahead, not hold out hopes of a settlement. And it is equally urgent to mobilize in the factories, workplaces, campuses and countryside for a struggle. This battle should not be carried on by government leaders in negotiations over the heads of the people. It must become a political struggle in the streets involving the masses, not only against the eurobankers and Wall Street, but against the Greek ruling class, which is complicit in all the rotten deals made with Berlin and Brussels.

Right now the Syriza leaders are publicly underestimating the enemy. Instead, preparations for a financial and economic assault should be underway. And all revolutionary forces in Greece should be looking for ways to unite in the struggle in the face of the crisis. This applies especially to the working-class organizations and the strategically situated trade unions, which have a glorious history of resisting political reaction, repression and exploitation.

Any strong initiative taken by the Greek masses to ward off the coming attacks would undoubtedly resonate in southern Europe and other European countries. Taking a struggle initiative in Greece is the most certain way to generate international solidarity.

The struggle against austerity and economic strangulation must lead down the path of class struggle and working-class organization for defense of the people.