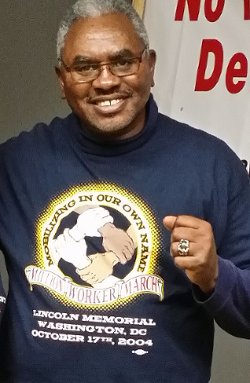 Oakland, Calif. — The Pacific Maritime Association announced on Feb. 4 their intent to lock out the International Longshore and Warehouse Union’s longshore workers at 29 West Coast ports if they don’t accept the PMA’s “last and final offer.” Then, on Feb. 6, they announced what amounts to a partial lockout until 8 a.m. on Feb. 9.

Despite an original agreement to hold negotiations between the PMA and the ILWU negotiating committee in secrecy, which has been upheld on the union’s side since the contract expired on June 30, the PMA has chosen to go public with their offer in an attempt to negotiate the contract through the media. In taking these steps, the PMA is putting out an all or nothing proposition and challenging the union’s right to negotiate the contract under normal fair bargaining practices.

The PMA is an employers association, coordinating the labor to support the estimated $1 trillion in annual international trade which moves through these ports. They represent the interests of giant multinationals, like Stevedoring Service of America, Hanjin, Maersk Lines and Evergreen Marine.

The union’s official response, by ILWU President Robert McEllrath, has been guarded, stating essentially, in a Feb. 4 press release, that “we’ve dropped almost all of our remaining issues to help get this settled — and the few issues that remain can be easily resolved”.

Workers World reached out to Clarence Thomas, past secretary/treasurer of ILWU Local 10 in the Bay Area, to get some perspective from a rank-and-file viewpoint on what the threat of the lockout is all about and some understanding on the issues as they concern the ILWU rank and file. Thomas is a third generation longshore worker who has been on the waterfront for 30 years. He was on the local’s executive board in a term which just expired in January 2015. Please note that he is not a member of the ILWU’s negotiating team.

WW: What do you think of the PMA’s lockout and statements on the contract?

Clarence Thomas: The threat of a lockout will not intimidate or weaken our resolve to achieve a fair and nonconcessionary contract. Neither will the actions of the employer in calling what some rank and filers have termed a “mini lockout” undermine our rank-and-file solidarity.

It’s very interesting that the employer has only been making the threat of a lockout since they announced what was said to be their last and final offer to the ILWU a few days ago. The Port of Long Beach’s cargo saw a 2.1 percent growth in November compared to the same month last year. It’s kind of difficult to make the argument on locking out the workers when the ports are productive. However, there are certain infrastructure challenges because the ships are bigger, they carry more containers, and the shipping companies have gotten out of the chassis [trailer to transport shipping containers] business, so consequently there is an insufficient number of chassis available to handle the explosive growth in containers on larger vessels coming to the West Coast.

WW: On its face, the PMA offer sounds okay, but it comes with assertions claiming over-inflated wages, “Cadillac” health benefits and accusations of slowdowns by the ILWU. What rank-and-file concerns aren’t being addressed by this publicly stated offer?

CT: Mr. James McKenna, who is the president and CEO of the PMA, which represents a consortium of 72 shipping/stevedoring companies and terminal operators, has made assertions and false claims about the ILWU: facts about how much money we make, blaming the ILWU for congestion at the ports, blaming the ILWU for problems attributable to lack of capacity to accommodate the increased volume of containers.

ILWU members have fought, shed blood and died for the health care benefits we have today and for the future. We have won these benefits through struggle. In 2002, the ILWU Pension and Welfare Committee reported that our health care and wages cost the employers only 1.5 to 3 percent of their gross earnings.

In today’s “crises of the capitalism economy,” where the bosses disdain paying living wages and steer workers to a global race to the bottom, James McKenna inflates basic longshore wages to build public resentment towards the ILWU and erode solidarity support from other unions and the community.

In my opinion, the PMA will fail because labor and the community know the ILWU has not only fought for good wages and benefits for its own members, but it has also fought for and advanced the interests of the working class. That is why we organized the Million Worker March in 2004 demanding national health care, living wages and pensions for all workers locally, nationally and around the world; the Justice for Oscar Grant movement to end police violence and repression in communities of color; support for the Boycott, Divestment and Sanctions movements for both South Africa during the anti-apartheid struggle and more recently for Palestine; support for the Wisconsin workers’ occupation of the state Capitol in 2011; and the Occupy Wall Street movement. Our record on matters of economic and social justice for the working class and the oppressed speaks for itself.

The ILWU dockers deserve a living wage for the work that they do and the dangers we face on the job.

WW: Knowing that the PMA has surely shared details of the negotiations with its board of member corporations, how has the one-sided secrecy between the ILWU leadership and its rank-and-file members affected the strength of this negotiating process?

CT: In my 30 years on the waterfront, these contract negotiations are unprecedented in terms of their duration. When my father was active on the waterfront in 1971, there was a strike that lasted a little over 100 days, but the negotiations weren’t nearly as long as these. The contract negotiations have gone on for nine months. Very early on in the negotiations, a decision was made by the leadership not to provide much information to the rank and file about the negotiations, which is a departure from previous years. The reasons that were given had to do with information being placed on the Internet that would somehow compromise them at the bargaining table. I disagree with that. Suffice it to say the rank and file are the backbone of the union. That’s where the strength comes for the leadership. No matter how well versed and articulate the leadership may be, it’s the rank and file that provides the muscle.

The employer and the union have been pretty closemouthed as to the issues that they have been grappling with. As a result the rank and file has been in many ways alienated from the discussion. That’s different from previous negotiations, where there have been talking points on the issues of the contract, rank-and-file committees to deal with issues concerning publicity, research, organizing and mobilizing. My contention is that anything that the employer knows, and that the contract negotiating committee knows, the rank and file should know as well.

I can’t say that the negotiations between the ILWU and the PMA wouldn’t have gone on for nine months had the ILWU rank and file been more involved, but one thing that I do know is that the employer is very well acquainted with the power of the rank and file. That’s one of the major reasons why they have been trying to lay the blame for the congestion on us slowing down, because they understand that our leverage is at the point of production.

WW: What about the PMA’s accusations about ILWU slowdowns?

CT: One of the continuing assertions of the employer is that the ILWU has been engaged in slowdowns. The employer is interested in speed/production. The union is interested in safety, first and foremost, because we don’t want people to be injured or killed in an effort to meet employer’s speed and production quotas. Production is certainly important, and the ports on the West Coast have been very productive over the years. But the issue concerning safety over speed is an ongoing struggle. The Port of Oakland in 2014 broke all of its cargo handling records, with a 5.3 percent increase in imports with a 20 percent surge in December. This proves we can work safe and be productive.

WW: Talk about the nature of the jobs which longshore workers do.

We are highly skilled, very dedicated and quite diligent at our work sites out of necessity, because the waterfront is a very perilous work environment. We handle various sizes of containers that carry massive tonnage. If you should be nudged by any piece of equipment or cargo it could kill or maim you. During the years of 2002-2008, longshore workers suffered a mortality rate of 17.3 deaths per 100,000 employees. Compared to the death rates of police officers or firefighters, the ILWU has higher mortality rates.

On the waterfront there are a number of environmental challenges that the workers face. For example, at many of the terminals there are warning signs alerting workers that the premises they are about to enter contain known carcinogens. Ships, cargo handling equipment, trucks and locomotives emit soot from diesel fuel which causes respiratory illnesses, lung disease, asthma, cancer and even premature births. Mr. McKenna greatly exaggerates the wages longshore workers make, but longshore workers pay the real cost with their health for handling the maritime cargo.

Workers World will continue to monitor the developments of the contract negotiations, together with Clarence Thomas, in future issues of the paper.