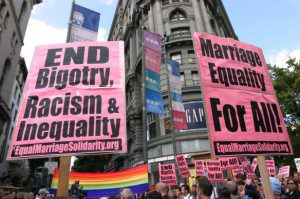 Bulletin: As of Feb. 9, the U.S. Supreme Court will not stay a federal court ruling ordering same-sex marriages to be conducted in Alabama.  More updates to follow.

The Michigan state government in Lansing — from the governor to the attorney general to the majority of state senators and representatives — is dominated by bigots who oppose marriage equality.

But the reality that they are fighting a losing battle is beginning to set in. On Feb. 4, Republican Gov. Rick Snyder announced that the state would not fight a court order to grant legal recognition for 323 Michigan same-sex couples. These couples were married on March 22, 2014, the day after federal Judge Bernard Friedman overturned Michigan’s ban on same-sex marriage in three counties where the clerks had made special arrangements to conduct weddings on a Saturday. By the end of the day a higher court had stayed Friedman’s ruling, blocking any additional legal unions.

The federal government recognized the 323 marriages but the state would not, denying the couples state benefits. The American Civil Liberties Union of Michigan sued the state on behalf of the couples. On Jan. 15, U.S. District Judge Mark Goldsmith ordered the state to recognize the marriages.

Snyder, along with Attorney General Bill Schuette, fought in court to uphold a marriage ban passed by voters in 2004. The state opposed Metro Detroit nurses April DeBoer and Jayne Rowse, who sued for the right to marry and to jointly adopt their three children. The U.S. Supreme Court will hear their case, along with cases from Ohio, Kentucky and Tennessee, in April.

The thousands of Michigan same-sex couples who did not get married last year — including Rowse and DeBoer, who chose to wait until the legal process was completed and their marriage could not be challenged in court — are waiting on the high court to make a decision on their basic civil right. The tide is turning in their favor. Ten years after Michigan voters enshrined discrimination in the law, public opinion polls now show that a majority of Michigan residents support the right to marry.

This shift, forged through the resilience and determination of the lesbian, gay, bisexual, transgender and queer movement, is what created the pressure on Lansing politicians to recognize 323 married couples as, in fact, married.