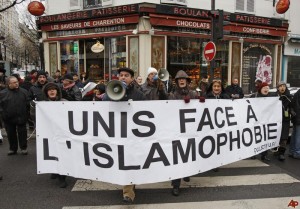 In Paris, “United Against Islamophobia.”

An 8-year-old boy in Nice, a small city on France’s Mediterranean coast near Italy, was hauled out of school to the police station. The boy’s father was called, television crews were summoned and headlines blared about the boy allegedly not respecting the minute of silence for Charlie Hebdo victims. An atmosphere of frenzied overreaction was created. (TV2, Jan. 28)

A report from Agence France Presse of a 9-year-old boy being charged with “supporting terrorism” in Aisne, a small city northeast of Paris, is yet another sign of this government- and media-manufactured frenzy that especially targets Muslims. (Jan. 30)

Another example is the high school philosophy teacher in Poitiers in western France who has been suspended for four months while he’s being investigated for charges of “defending terrorism.” These charges carry a penalty of five years in jail and a 10,000 euro fine. Despite the atmosphere of reaction, colleagues have filed notice of a one-day strike Feb. 5 in his support. (Libération, Jan. 30)

Najat Vallaud-Belkacem, the newly appointed minister of education, claimed the 8-year-old Nice boy’s father had been “charged with promoting terrorism.” But Radio Beur FM, a French chain directed by and to the North African community in France, called that “the sad reflection of a state lie draped in virtue.” (Oumma.com, Jan. 30)

According to his lawyer, the boy, named Ahmed, had been playing in a sandbox when the school’s principal slapped him on the back of his head and said, “Stop digging. You won’t find a machine gun to kill us all.” Although Ahmed is diabetic, he was deprived of his insulin. He was taken to the police station, and then his father was notified. (Libération, Jan. 28)

A report claims the French ministry of education is investigating 200 reported cases of “supporting terrorism” throughout France. (AFP, Jan. 14)

These cases suggest widespread resistance to the current campaign of promoting French imperialism and an anti-Islam frenzy under the guise of advancing “the republican values of the French state.”

Given all the heavy state artillery directed against an 8-year-old who dared to say, “Je ne suis pas Charlie” (“I am not Charlie”), it was interesting to look at French reviews of “The Interview,” the U.S. film about a CIA plot to assassinate Kim Jung Un, leader of the Democratic People’s Republic of Korea. In the reviews by Le Figaro and Le Point, there wasn’t a word about this crude film extolling terrorism.

For the French and other imperialists, “terrorism” only flows out of the resistance of the oppressed.