The United Steelworkers called a strike on Feb. 1 at nine plants run by Royal Dutch Shell on behalf of several companies, including Exxon Mobil and Chevron. The refineries on strike account for 10 percent of U.S. refining capacity; they can produce 1.82 million barrels of fuel a day. This is the biggest walkout since 1980, an action which lasted three months. The union has rejected five offers by Shell since talks began on Jan. 21. Bloomberg reported Feb. 2, “While only one of the nine plants has curbed production amid the stoppage, a full walkout of USW workers would threaten to disrupt as much as 64 percent of U.S. fuel output. Shell and union officials began negotiations amid the biggest collapse in oil prices since 2008.” Analysts estimate that if the strike grows, it could negatively affect the price of oil worldwide. The USW represents 30,000 employees at 230 refineries, terminals, pipelines and chemical plants in the U.S.

According to a Feb. 1 USW statement, Shell walked out of negotiations and refused to return to the table on Jan. 31 when the contract expired. The major issues include wage increases; “onerous” overtime; unsafe staffing levels; dangerous conditions like daily fires, emissions, leaks and explosions that threaten local communities; and “flagrant” contracting out that threatens health and safety on the job. USW Vice President Tom Conway noted, “The industry is the richest in the world and can afford to make the changes we offered in bargaining. The problem is that oil companies … continue to value production and profit over health and safety, workers and the community.”

Almost 12,000 Delta Airlines flight attendants, approximately 60 percent of the workforce, have signed union cards calling for representation by the Machinists union. If Delta’s more than 20,000 flight attendants elect to join IAM, they will have earned the distinction of leading the largest successful transportation industry organizing drive in history.

Longtime Delta flight attendant Gabe Perez asserted: “We are the reason Delta is the world’s most profitable carrier and leads the industry in almost every financial and operational measure. Yet, we lag the industry in wages, benefits and work rules. That will change once we win our election and negotiate the industry-best contract we deserve.” (Workday Minnesota, Jan. 13)

After eight months of organizing for better working conditions, including more hours, advanced notification of schedules, better pay and dignity, workers at Zara stores, a clothing chain in Manhattan, are seeing the results of their efforts. Zara announced in early January that every one of its employees would receive pay increases, some as much as $2.50 an hour. Management also promised workers more full-time positions. The workers began organizing #ChangeZara last May with the help of the Department Store union and the Retail Action Project. (aflcio.org/blog, Jan. 6) 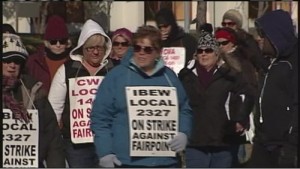 Workers at the New England telecommunications provider FairPoint, represented by Communication Workers Local 1400 and the International Brotherhood of Electrical Workers Local 2327, have been on strike for over 130 days. Almost 2,000 FairPoint workers went on strike in October after management threatened to cut wages and benefits and outsource union jobs to outside contractors. Despite a Dec. 30 NLRB decision to dismiss the unfair labor practice charges filed by the union against FairPoint, the workers are not backing down and picket lines continue despite record snowfalls. Although both parties are under a gag order until negotiations are concluded, federal mediators say progress is being made toward a mutually agreeable contract.

Ten former McDonald’s workers filed a civil rights suit in Virginia on Jan. 22 against the fast food giant for alleged racial discrimination, wrongful termination and sexual harassment. According to the plaintiffs, 15 Black workers were fired in one day solely because of their race. The suit also accuses a manager of inappropriately touching workers and offering “female employees better working conditions in exchange for sexual favors.”

The lawsuit names both the McDonald’s franchise and the global McDonald’s Corporation as defendants. This is among the first suits to be filed against the corporation since the Dec. 19 National Labor Relations Board decision determined that the corporation can be held liable for the actions of its franchisees. The plaintiffs are seeking payment for lost wages, emotional distress and other damages. The NAACP and “Fight for $15” are supporting them.

The food industry is notorious for harassment. Some 60 percent of women workers in restaurants say they have been sexually harassed. (Chicago Tribune, Jan. 22)

A massive wage theft lawsuit against restaurant chain TGI Friday’s will move forward as a collective action suit, said the New York federal judge who granted 42,000 workers conditional certification on Jan. 20. Workers in Massachusetts, New York and Virginia accuse the chain of paying less than the federal minimum wage, withholding overtime pay and forcing employees to forfeit some of their tips and work off the books.

According to a 2014 study, nearly 9 out of 10 fast food workers have experienced wage theft, but few report it. It’s estimated that the amount of money stolen annually from employees is more than $50 billion. And the problem is increasing. Complaints of wage theft rose 400 percent over the last decade. (thinkprogress.org, Jan. 23)