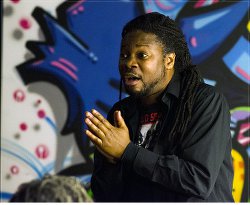 Oakland, Calif. — At a Workers World Party meeting here on Jan. 31, Imani Henry asked the audience, “How do we ratchet it up in 2015, the year of resistance?” Henry is a longtime activist in the anti-police brutality, anti-war and lesbian, gay, bi, trans and queer movements in the U.S. He is also an organizer with the Peoples Power Assembly, which helped to coordinate emergency day-of/day-after actions in New York and nationally in response to the decision by a Ferguson, Mo., grand jury not to indict the cop who killed a young unarmed Black man, Michael Brown. 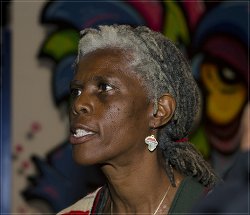 The meeting, titled “From NYC to Ferguson to Oakland: the Nationwide Fight Against Police Terror,” provoked a lively discussion about the many tactics being used in the fight for justice against racist police brutality.

Also on the program was Gloria Verdieu of the San Diego Committee Against Police Brutality. She emphasized the importance of speaking the names and showing the faces of all the people whose lives have been stolen by police terror. Verdieu also leads the San Diego Coalition to Free Mumia Abu-Jamal and All Political Prisoners.

Cyndi Mitchell, sister of Mario Romero, who was killed by the Vallejo police, shared Romero’s story with the group.

The meeting took place at the Alan Blueford Center for Justice, a space dedicated to healing the community in honor of Alan Blueford, killed by Oakland police on May 6, 2012.