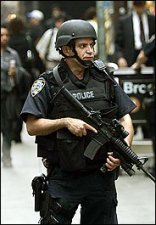 New York Police Commissioner William Bratton, in a speech to the Police Foundation on Jan. 29, announced the formation of a new unit to combat “terrorism and protests.”

Here’s the New York Times report on his speech: “The new unit, to be made up of roughly 350 officers and to be called the Strategic Response Group, will be created in the coming months, Mr. Bratton said. Officers assigned to it would be equipped with heavy protective gear and machine guns, and receive advanced training in counterterrorism tactics and ‘advanced disorder control,’ he said. ‘It is designed for dealing with events like our recent protests or incidents like Mumbai or what just happened in Paris,’ Mr. Bratton said.”

In New York City! Where the streets are densely packed with people. The cops are threatening to use machine guns on protesters, lumping them in with “terrorists”?

Bratton was appointed by Mayor Bill de Blasio, who was endorsed by the unions, whose spouse and children are African-American, and who campaigned largely on ending the police terror tactic of stop-and-frisk, which over the years ensnared hundreds of thousands of young people, almost all from the Black and Brown communities.

The published report on Bratton’s speech must have kicked up quite a storm, because four days later another article appeared in the Times “clarifying” Bratton’s remarks.

“The idea of equipping officers with heavy weapons and protective gear to monitor protesters drew immediate criticism last week, and on Monday, Mr. Bratton sought to clarify his statements. ‘I may have in my remarks or in your interpretation of my remarks confused you or confused the issue,’ he told reporters. The plan, he said, is to have protests and antiterrorism duties handled by different types of officers, in different corners of the department.” (Feb. 2)

Bratton’s weasely words — “different corners of the department” — shouldn’t set anyone’s mind at rest about what this police honcho intends. He and the super-rich Wall Street class he serves want to terrorize potential protesters with threats of extreme violence. Yes, the rich and their cops are the terrorists.

The police mindset reflects the despotic tendencies of those paid to defend an increasingly unpopular capitalist society that is wracked with unsolvable contradictions. New York City has the greatest income gap in the country. Luxury condos, limos, even private helicopters are at the disposal of the super-rich, while hunger and homelessness spread like a cancer through the working class — especially its oppressed sectors, the Black and Brown internal colonies of imperialism.

Are there protests? You’d better believe it. Will they grow stronger? Absolutely.

But Bratton’s words teach us something else, too, about who wields the power in a capitalist society. Bratton represents the state, the “body of armed men,” in the words of Russian revolutionary V.I. Lenin. De Blasio, although elected by the people, has no “army” of his own.

Why did he bring Bratton back in the first place, when this top cop supports what de Blasio claims to be against? (See “Bratton’s Endorsement of Stop-and-Frisk,” The New Yorker, Dec. 5, 2013)

Because the ruling class wanted Bratton — and they got him. Elections may show to some degree what the people want, but making progressive change happen takes a much, much bigger struggle by the whole working class. The protests are a good beginning.