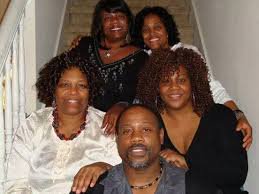 Kevin Davis with his sisters.

Atlanta — Kevin Davis’ family and friends are in disbelief and sorrow.

How could police have shot and killed Davis, a hardworking, 44-year-old beloved brother and uncle, a “good guy,” after he called 911 for help?

On the night of Dec. 29, Davis’ girlfriend, April Edwards, was involved in an altercation with Terrance Hilyard, a co-worker whom Davis had befriended and who was staying at his apartment temporarily.

The argument escalated. According to Edwards, Hilyard stabbed her in the arm with a kitchen knife and fled. While Davis was rendering first aid to Edwards, he called 911.

Edwards says that Davis, hearing gunshots in his living room, feared that Hilyard had returned, armed. He retrieved his gun from his bedroom. As he came out of the doorway, he was immediately shot several times by Pitts.

Edwards came running out of the bedroom, screaming, “What have you done? Why did you shoot him?” She and other witnesses say Pitts never identified himself as a police officer or ordered Davis to drop his gun before shooting him.

As Davis lay bleeding on the floor, he was arrested, handcuffed and charged with aggravated assault on an officer. The popular restaurant worker was taken to Grady Hospital in police custody, which meant his family was not allowed to be with him in his hospital room. Family members beseeched everyone in authority, from police to doctors, to let them visit him — to no avail.

Davis died two days later, on Dec. 31. Only then did police coldly grant them permission to see their family member.

One month has passed since Kevin Davis was killed by a DeKalb County police officer. Despite repeated requests for information about an investigation into this officer-involved shooting, there has been only silence. Since it is common practice to involve the Georgia Bureau of Investigation in such police killings, the community suspects a cover-up in this case.

At an emotional rally at the DeKalb Courthouse steps on the one-month anniversary of his shooting, Delisa Davis, one of his sisters, spoke of the unfeeling attitude of the police, saying her family and Kevin were “dismissed like yesterday’s garbage.” She appealed to the community to help, saying they can’t fight this alone.

The large group walked a few blocks from the courthouse to the downtown Decatur sandwich shop where Davis’ friendly and personable manner had made him a favorite with customers and co-workers alike. Next door is a bike shop where he fixed up discarded bicycles to give to neighborhood kids.

The family is asking that people request a GBI investigation into Kevin Davis’s death by calling the DeKalb County Police Department at 678-406-7929 and the DeKalb County District Attorney’s office at 404-371-2561.