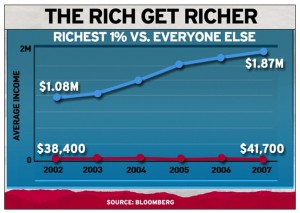 Jan. 26 — President Barack Obama and the New York Times have apparently just discovered something every worker in the United States already knows: The rich get richer and the poor get poorer.

In his Jan. 20 State of the Union address, Obama declared his intention to press for legislation that would help a shrinking “middle class” in the face of widespread wage stagnation. The New York Times followed with statistical reports of declining wages and the growing concentration of wealth in the hands of the richest few. (Jan. 26)

An Oxfam International study revealed that “the richest 1% … control nearly half of the world’s total wealth” and the “80 wealthiest people … own $1.9 trillion … nearly the same amount shared by … 3.5 billion people” at the bottom. (Business Day, Jan. 19)

These trends, however, have been going on steadily since the early 1970s. Unions, progressive publications and even the federal government have reported for decades on the deepening impoverishment of the majority of the population.

The Occupy Wall Street movement burst onto the scene in October 2011 condemning the power and privilege of the richest “1%” versus the poverty, unemployment and suffering of the “99%.”

But the last thing Obama or the New York Times intend is to help spur on a mass movement countering these developments. On the contrary, these agents of the 1% — more properly defined as the capitalist class — want to sow confusion and deflect any growing class-struggle movements and mass anger into votes for the Democratic Party in 2016, even after their disastrous showing in November where only 36.3 percent of eligible voters — the lowest number in 72 years — went to the polls.

The very language used in this public debate is meant to hide the class nature of the U.S. economic system. The president only talks about restoring the disappearing middle class. The “middle” of what is never stated.

The science of Marxism, now 166 years in existence, clarifies that we live in a capitalist economy with a small ruling capitalist class and a large working class. To mention these forbidden terms, however, might promote class consciousness and lead to real class struggle.

By massive struggles of unions and uprisings of oppressed peoples over the past 100 years, a section of the working class was able to secure a more comfortable standard of living. Calling these working-class families “middle class” simply hides that they are part and parcel of the broader working class, all of whom are exploited by and enrich the capitalist class of billionaire bankers and corporate bosses.

As the capitalist system has reached an inevitable dead end, the ruling class is inexorably driven to continue expanding its wealth by driving down wages and eliminating workers’ benefits. Layoffs and mass unemployment are endemic.

Looting the U.S. Treasury is another source of capitalist wealth. A Bloomberg News headline revealed that the “Wall Street Aristocracy Got $1.2 Trillion” in the bank bailout of 2008. (Aug. 22, 2011) City of Detroit retirees got a lesson in class relations in 2014 when a federal bankruptcy judge approved cuts to constitutionally protected pensions and medical benefits amounting to over $6 billion to pay off the biggest banks.

Obama’s speech just lifted the corner of the curtain covering up these facts. His proposals, couched in “middle class” doublespeak, called for free community college tuition, greater tax breaks for lower income people and funds for child care. With the Republican sweep of both the Senate and House of Representatives, there is really no chance of this legislation being passed.

Republican hardliners in Congress lost no time in denouncing the Democrats’ proposals. Some Republican presidential hopefuls, however, picked up on the theme of growing income inequality. Mitt Romney vowed to “end the scourge of poverty” if he makes another bid for the presidency. (New York Times, Jan. 22) Both Jeb Bush and Senate majority leader Mitch McConnell are also cited as urging the Republicans to pay more attention to this issue. The less ignorant among the Republican right wing are realizing that the growing divide between the richest few and the impoverished working class might be dangerous to the success of their party.

The enormous power of the working class

Neither Obama nor the Democrats, both willing tools of Wall Street, really want to unleash the enormous power of an angry working class — the only power that could really challenge the laws of rapacious capitalism. They serve their capitalist masters best by “keeping hope alive” among the working class that things might get better with time or another election.

But the statistics and graphs filling the pages of the New York Times and the vague references to stagnation and income inequality by Obama are no true measure of the suffering and despair growing among the millions and millions of workers and oppressed people who are finding it increasingly impossible to survive. The class truth must inevitably find its expression in serious struggles.

The Occupy Wall Street explosion of several years ago may have been the opening shot of this fightback. The current “Black Lives Matter” movement, led by African-American youth and joined by all other nationalities, is deeper, more militant and more widespread than Occupy was.

This current uprising is not only about the pervasive police murder of African-American youth. Ignited by the racist killings, it is fueled and sustained by the intractably high unemployment and low-wage jobs among young people. The “Fight for $15” movement merged with anti-racist protests around the U.S. on so-called “Black Friday.” Demands for jobs and education are seen widely among protesters.

This ongoing Black Lives Matter movement began just a month after the November election with its abysmally low turnout. What we are seeing today is only a prelude to mass uprisings among all sections of the working class that will shake the capitalist system to the core and threaten to bring the whole racist, anti-worker system crashing down.