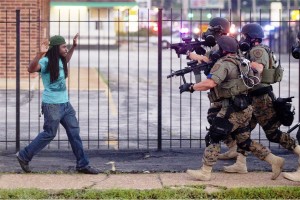 The “State of the Union” is the annual presidential speech that is supposed to report on how things are going for the people of this country.

In thousands of protest rallies and marches over recent months, especially since the events in Ferguson, Mo., people have vented their great anger and pain over police killings of youth of color and the official cover-ups that have followed. Major highways have been shut down and countless die-ins held in public places. To an amazing extent, a large number of those on the sidelines, including people directly inconvenienced by traffic tie-ups, have cheered and waved in approval.

A historian of this period would certainly expect that, of all the promises made by the president, bringing justice to those targeted by police terrorism would have been at the top of the list of his State of the Union.

Plus, in the last two presidential elections, a majority of voters cast their ballots for a Black president, indicating they want to see an end to the brutal, racist history of this country. Being for racial justice and reining in police brutality are popular in the United States.

So how to explain that Obama made only one mention of Ferguson and the police in his 28-minute speech, and that came toward the very end? Here’s what he said:

He didn’t even mention the brutal killings of so many Black youth by the police. Just “harassment.” But as for the police themselves, the message is that their lives are in grave danger.

It should be remembered that, according to the government’s own figures as compiled by the Bureau of Labor Statistics, police don’t even appear in the 10 most dangerous occupations.

If the White House is truly concerned about protecting the lives of those most likely to be killed on the job, then Obama should have mentioned the fishers, lumberjacks, construction workers, trash collectors, miners, agricultural workers, pilots, roofers, iron workers and truck drivers who take their lives in their hands every time they go to work — and generally earn much less pay than the police.

We all should know that presidential speeches are very carefully vetted by the people who wield real political power. Their decision to treat the issue of racist police violence in this minimalist way reveals so much about the true character of the U.S. government. In many ways, the elected officials, both the presidency and the Congress, are just civilian window dressing for the state and its brutal role of suppression.

Because of the many battles fought by workers and oppressed peoples over centuries, the government does perform a number of useful services: Medicare and Medicaid, the postal service, inspections of meat and produce, the establishment of parks and schools, to name just a few. But these useful things constantly get underfunded and subverted in order to put more resources into what the ruling class — the one-tenth of the 1% — consider the real function of the state: repression.

The police, the National Guard and the prison-industrial complex are a vital part of internal repression, just as the Pentagon, the CIA and other bodies, some of whose budgets are totally secret, carry out external repression. The lion’s share of our taxes are spent on state violence against those who have the most reason to rebel because they are exploited and oppressed by capitalism here and imperialism abroad.

Not even a president is allowed to criticize these bodies, no matter how blatantly they carry out systematic terror — whether in the dungeons of Abu Ghraib and Guantánamo, in Rikers Island and all the “supermax” U.S. prisons, or on the streets of Ferguson and Oakland, Calif.

That leaves it up to the workers and oppressed themselves to organize and make the revolutionary changes that will never be made by the political machine of the billionaire class.