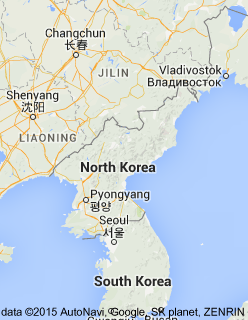 If you listen only to Hollywood and Washington, you would think that the northern half of Korea, the Democratic People’s Republic of Korea, is a terrible place where the people live in prison-like conditions and the leaders (“dictators”) are totally irrational.

So why is the regime in the southern part of Korea, which is not only aligned with the U.S. politically and militarily but also occupied by almost 30,000 U.S. troops, so afraid of the truth that it just deported a Korean-American woman, Shin Eun-mi, because she dared to say something nice in public about the north?

And why, if it’s so “democratic,” did the south Korean regime in December ban the only real opposition party, the United Progressive Party, arrest some of its leading members and eject its five elected deputies from the parliament? The party was reported to have around 100,000 members and advocated for the reunification of the Korean nation.

South Korea’s current president, Park Geun-hye, is the daughter of Park Chung-hee, a military dictator who, in the words of the Dec. 18 New York Times, “ruled the country with an iron fist from 1961 to 1979.” During that period, the prisons were full of progressives. Park was so hated that the Korean CIA assassinated him so that another general, Chun Doo-hwan, could take his place. In 1980, after an uprising for democracy in the southern city of Gwangju, Chun ordered the massacre of some 2,000 people, most of them students.

All this had the approval of the U.S. government. On May 17, 2014, to commemorate the anniversary of the Gwangju massacre, the Japan Times ran an article called “Dying for Democracy.” It explained that “Government documents obtained through Freedom of Information requests in the 1990s reveal U.S. complicity in sanctioning the deployment of South Korean military forces to quash popular rebellion in the spring of 1980 that facilitated the Gwangju massacre.” Under the Status of Forces Agreement that has been in place ever since the Korean War, the U.S. has supreme authority over the armed forces of south Korea.

Contrary to all the headlines here demonizing north Korea, it is the regime in the south that is so hated by a large number of its people. This came out when a hugely overloaded ferry boat full of hundreds of students capsized, drowning more than 300 people on April 16. It turned out that the rich owners, who had strong political connections to the south Korean government, had flouted numerous safety rules in order to pack more people onto the ferry — and make more money.

Now the U.S. is behind an investigation of “human rights violations” — not in south Korea, but in the DPRK. This investigation will be taking testimony in south Korea, where it’s a crime, under the National Security Act, to say anything good about the north and people are arrested for resending Twitter posts from the DPRK. (NY Times, Dec. 19)

During all this, the leader of the Workers’ Party of Korea, Kim Jong Un, in his New Year’s address, reiterated the willingness of the DPRK to meet with the leaders of the south in order to defuse tensions on the Korean peninsula and find ways to allow families divided for over 60 years to visit one another. This has undoubtedly struck a strong chord in both the north and the south.

This is the backdrop for the screaming headlines in the U.S. accusing the DPRK of “cyberterrorism” for allegedly hacking the Sony Corp. over its crudely nauseating film “The Interview.” The State Department admittedly worked with the filmmakers to create a film that promotes the violent assassination of the DPRK’s leader, treating it as a big “joke.”

Many experts had expressed doubt that the DPRK was behind the attacks on Sony. So now the U.S. government, in a newly disclosed National Security Agency document, brags that it hacked into the DPRK’s computer systems as early as 2010, and that’s how it knew.

Since Washington seems to know so much about the DPRK, it must also know that there is very strong sentiment in both the north and the south to get the U.S. and its troops out, so the Korean people can determine their own destiny. But you won’t find that in U.S. headlines.

Deirdre Griswold has visited both south and north Korea. In 2004 she spoke at a mass rally in Gwangju, south Korea, commemorating the 1980 massacre.