The following message from the four fired leaders of United Steelworkers Local 8751 in Boston was delivered to the Detroit MLK rally and march on Jan. 19. 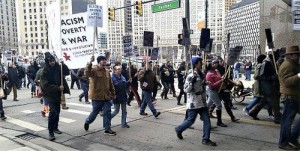 We’re honored to bring greetings on Martin Luther King Jr.’s weekend. Our union for 40 years has sought to live the legacy of Dr. King. At the time of his assassination he was standing with sanitation workers and building for a Poor People’s March on Washington, D.C. Our union’s always been about more than just grievances and good wages and benefits. We’re being targeted because we are a political union that stands against racism.

Our very history is tied up with the struggle against racism. Whether it was dealing with the rocks and bricks that were thrown at the buses with Black schoolchildren that were going into racist neighborhoods or dealing with our union being 98 percent people of color from the immigrant communities — Haitian, Cape Verdean, Asian, African American — we are united as one. We believe we are living the true legacy of real unionism.

One of our mottos has been that “An injury to one is an injury to all.” Every union, everybody in Boston knows the record of Steelworkers Local 8751. For 40 years we haven’t lost anything. We never take the concessions they try to impose on unions. This is why the Veolia corporation, the latest company to run the privatized school transportation in Boston, is after us. They computerized the payroll system so only management can get in, and the result is wage theft. We’ve filed over 300 grievances, and they have refused to pay most of them. They made our insurance more expensive and took away benefits. They made long-term disability benefits almost impossible to access.

They will keep breaking our contract until somebody stops them, and we’re going to stop them!

Veolia was hired like a hired gun here, the same way as in Detroit. It’s in water, sewage, transportation and energy, but it really doesn’t produce anything. People in Detroit recognize that. What it really is hired to produce is cutbacks, austerity and union busting.

Throughout the world Veolia is known for doing anything for profit, even some of the worst things. Like helping the Israeli government oppress the Palestinian people. Veolia operates a segregated rail line where only Jewish settlers ride one line and only Arab Palestinians ride another line in and out of the West Bank.

On the morning of Oct. 8, 2013, drivers in four different yards came into work and asked their boss for a meeting over outstanding issues. Jonathan Steketee, who the city has now hired to be transportation director, called the police instead of agreeing to meet with the drivers. They came with dozens of officers, as if it had been pre-planned, to all four yards and ordered all the workers to get off the property with their vehicles. Veolia illegally locked out the workers. They created the lie in the media, with the mayor’s assistance, that the drivers had gone on a wildcat strike.

Veolia then went after the organizational infrastructure, suspending, out of 900 workers, four leaders, one from each yard. On Nov. 13, 2013, they thought that this union would fall apart when they fired us.

Last year Brother Kirschbaum, founder of the union, was among some 300 supporters, including a father with a set of 18-month-old twins and people in wheelchairs. He was giving a peaceful update. But Veolia got the city to file trumped-up charges and he faces years in jail for felonious assault and trespass.

Now it’s important to really own the legacy of the Civil Rights movement, which was uniting the rank and file to take on the bigots and racists, to build a united movement that can bring true justice in our important fights.

Black Lives Matter. Black cities matter. Unions matter. Detroit matters to us, and we are honored to share these words knowing that our struggle matters to you.