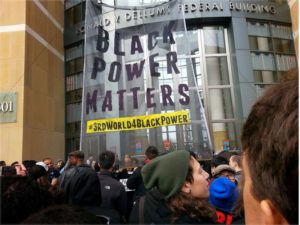 Oakland, Calif. — Activists here launched a plan for 96 hours of direct action to reclaim the legacy of Dr. Martin Luther King Jr. and keep the fire lit in the rebellion against police violence. The Anti-Police Terror Project, through a series of spokes-council organizing meetings, facilitated the coordination of numerous independently organized direct actions throughout the four-day MLK weekend Jan. 16-19.

Beginning early Friday morning, Jan. 16, the Third World Resistance for Black Power locked down the front and back doors to the Oakland Federal Building for the purpose of “reclaiming MLK’s legacy of militant internationalism [by] linking third world struggle with Black resistance.” They held the doors at the Federal building for four and a half hours.

Simultaneously, hundreds of other protesters under the name BART (Bay Area Rapid Transit) Friday shut down San Francisco’s busy downtown Montgomery BART station, the Embarcadero station and the Powell St. station in rolling blockades, armed only with spoons. The spoons were used to create a deafening clang on the metal poles inside the stations.

Demands were to disarm the notorious BART police, provide discount fares for low-income riders and drop the charges and ransom against the BART 14. The BART 14 were arrested after an action by the BlackOut Collective on “Black Friday,”  Nov. 28, when they chained themselves to BART rail cars, shutting down the Transbay system for several hours.

Later, a group of Black organizers walked into Oakland’s recently inaugurated Mayor Libby Schaff’s office and read a series of demands, while others shut down an Oakland foreclosure auction.

On Sunday, Jan. 18, protesters held a die-in at the Oakland Walmart, holding signs about John Crawford, a young Black man who was killed by police inside an Ohio Walmart as he was holding one of the store’s BB guns.

Other protesters disrupted shoppers at a high-end Emeryville shopping center, which was built on the shellmounds (burial grounds) of the indigenous Ohlone people. A die-in was also held in the street after a showing of “Selma” at an Oakland movie theater. In San Francisco, a 12-hour sleep-in took place to defend the right to rest outside the Powell St. BART station, where many homeless people are constantly criminalized by police.

The 96 hours culminated Jan. 19 with a Jobs and Economy march in Oakland, starting at the Fruitvale BART station where Oscar Grant was killed and ending at Coliseum City, a development project planned for East Oakland. The Anti-Police Terror Project demands a local hiring policy that ensures 50 percent of the jobs go to Black people and the disenfranchised on probation and parole; a Health Impact Assessment that lays out how many Oakland residents will be displaced as a result of this development and other undesirable outcomes; and a commitment to providing living-wage jobs with benefits to all employees of the Coliseum City project.

The APTP is a project of the ONYX Organizing Committee that, in coalition with other organizations like the Community Ready Corps, the Alan Blueford Center for Justice, Workers World, Healthy Hoodz and the Idriss Stelley Foundation, is working to develop a replicable and sustainable model to end police terrorism in the U.S.