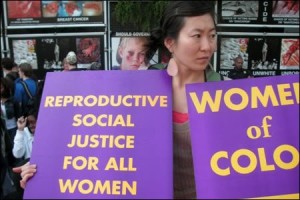 A new report shows that the state of abortion rights in the U.S. on the 42nd anniversary of the Supreme Court’s Roe v. Wade decision legalizing abortion is significantly worse than even four years ago.

Nine million poor women (one in seven women of childbearing age) who are eligible for Medicaid coverage are denied abortion coverage, although they have coverage for other reproductive health care, including sterilizations. They are in addition to millions of women in 23 states that have refused to expand Medicaid coverage under the Affordable Care Act.

Given the restrictions passed by 27 states — like limits on medically induced abortions and bans after 20 weeks of pregnancy, waiting periods, medically unnecessary procedures, and facilities’ physical requirements — millions of low-wage women workers, particularly women of color and young, immigrant, rural and disabled women, many of whom are single mothers, do not have ready access to abortion, even though it is the law of the land.

If we expand our vision beyond abortion rights to reproductive justice — the concept that women’s human rights, including all social, economic and political, cultural aspects of life, must be acknowledged and honored in law and practice — then the vast majority of women in this country do not have the quality of life they deserve. Only the richest of women, whose rights are not bound by what money can buy, may have such luxury — though they may be otherwise bound by patriarchal demands.

The promise of Roe v. Wade, envisioned by the millions of young women who fought in the streets for legal abortion in the early 1970s, was to expand women’s right to control their bodies, to allow them to decide whether to have or not have children and to help them achieve equality in all aspects of life. That goal is now a distant memory for those who fought for it.

Given the increasing inequality between those who work for wages and those who own the rich-as-Croesus corporations, it’s no wonder white women are still making only 77 percent of what white men make, while women of color make even less than what Black and Brown men make. The bosses are only too eager to buy Republican Party shills to impose austerity on working people and the oppressed.

The primary cudgel Congress has over women — besides denying them equal pay — is limiting abortion rights. In their first three days in office, the new Republican-controlled House of Representatives introduced five anti-abortion bills.

The keystone of the anti-choice agenda is a federal ban on abortions after 20 weeks of pregnancy, which the House passed in 2013. Groups supporting the ban claim a fetus can feel pain at 20 weeks, though major medical associations attest that is not scientifically possible. Already 14 states have 20-week bans on their books; with new Republican-controlled state legislatures more are sure to follow, including other ­restrictions.

Twenty-week bans are troublesome for two reasons. One, women at risk for fetal abnormalities often get the results of amniocentesis and other genetic tests around that time or later. Two, such a ban conflicts with the second-trimester limit of 24 weeks set by Roe v. Wade; that’s the time when a fetus may live independently.

Passage of such a federal ban is a direct challenge to Roe, which is exactly what the right wing — and their corporate owners — want.

Even if President Barack Obama vetoes such a ban, it is likely that the hodgepodge of conflicting regulations passed by the states will eventually be appealed to the Supreme Court. The court would be asked to rule on whether a state has created an “undue burden” on a woman seeking an abortion. That test was established in the 1992 Casey decision.

In a Jan. 7 case about the legality of the Texas law known as HB 2, heard by the U.S. Court of Appeals for the Fifth Circuit, a panel of judges ruled that a plank of the law requiring doctors to have admitting privileges at a nearby hospital was constitutional when the state had more than 20 clinics. But another panel of judges blocked a similar law in Mississippi; finding it constitutional would have shut the only clinic in the state. Confusion abounds.

There are glimmers of hope, as the progressive wing of the women’s health and women’s rights movement has begun to coalesce locally and nationally. The Women’s Health Protection Act, which would negate state laws, was introduced in Congress last year with 166 congressional cosponsors and more than 300,000 grassroots supporters.

In July 2013 the reproductive justice, health, youth and rights organizations launched All Above All. Its purpose is to overturn the 1977 Hyde Amendment that ended Medicaid abortion coverage. According to the press release announcing the initiative, the campaign “engages young people 18 to 30 years old and people of color to realize their collective power. … As those who are most affected when politicians withhold abortion coverage, millennials and people of color are … taking a stand to ensure Medicaid coverage for all pregnancy care, including abortion.”

But more is urgently needed. There has not been a national demonstration affirming women’s right to choose since 2004. Even though national mobilizations can cost millions of dollars, just setting a date and issuing a strong, united call, as organizers in Ferguson, Mo., did for activism around “Black Lives Matter,” might be enough to initiate a demonstration in Washington, D.C., and elsewhere around the country.

As the movie “Selma” shows, protests matter. It’s time to take to the streets to demand reproductive justice for all ­women.