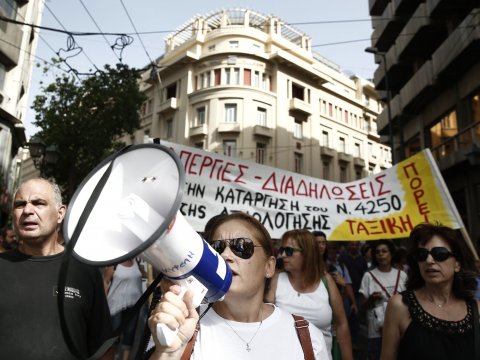 Every political and economic problem afflicting Europe has a worse case scenario in Greece. Whichever party wins the snap election called for Jan. 25 will either offer a small ray of hope or another five years of failed austerity.

The Greek Constitution calls for elections when the parliament can’t elect a new president. This happened in late December 2014.

The two major parties contesting the parliamentary elections are New Democracy, which is leading the current government headed by Prime Minister Antonis Samaras, and Syriza, the official opposition led by Alexis Tsipras.

The European bourgeoisie, in particular the German Finance Minister Wolfgang Schaeubel, has said that if New Democracy and Samaras win the upcoming vote, then the bailout will continue along with austerity. If Syriza wins, they say, then the resulting chaos will likely force Greece out of the European Union.

Deflation, a general fall in prices, wages and economic output and profits, has been raging since 2008. From its high point in 2007 — when the Greek economy was still growing — to 2014, the Greek output of goods and services has fallen by 33 percent, based on official Greek economic statistics. (qz.com) This is a sharper fall than the United States experienced during the the Great Depression in the 1930s.

In November 2014, Greece’s economy minister declared his country’s six-year recession over. The Guardian, a British newspaper that carefully covers Greece, then surveyed hundreds of Greek families. Only 12 percent said they saw any signs of improvement.

The Guardian’s Greece correspondent summed up its findings in a Nov. 27 article:

“The ‘success story’ peddled by the government differs wildly from what life is really like on the ground — with plummeting living standards, unprecedented unemployment and the inability of most to keep up with bills, including the barrage of new taxes that can change with lightning speed on any given day.

“Five years down the road the crisis, to great degree, has been ‘normalized,’ but the disconnect is evident in the collateral damage … suicides, homelessness, a middle class pauperized by austerity.”

The official unemployment rate is 27 percent. For youth under 30, at least 50 percent are out of work. Most jobless Greeks haven’t had a paycheck for two years. These figures don’t count the many workers whose pay is one to six months late. (New York Times, Dec. 29)

Over 400,000 Greek families have no one in the family working, which means they have to depend on private food pantries to eat. (Newsweek, Oct. 14)

The so-called economic troika — the International Monetary Fund, the European Central Bank and the European Commission — demanded 800 separate measures of cuts and tax increases in Greece. They were designed to lower Greece’s foreign debt in relation to its output and thus make it easier for Greece to meet its bond obligations. Instead, the debt-to-gross-domestic-product ratio has grown. This makes it abundantly clear that Greece’s debt cannot be paid off for decades under the current financial structure.

Greek workers did not take these vicious attacks lying down. At least 40 general strikes and major strikes in transportation and steel have taken place, generally involving all three union confederations. The struggles were particularly intense from 2010 to 2012, but almost always the bourgeoisie was able to beat them back and avoid making any major concessions.

While Syriza didn’t oppose these strikes, it did not have many members who were workers, so it did not have much influence. The Greek Communist Party (KKE) and the Greek Socialist Party (PASOK) were the political parties with the deepest connections to the labor movement, though PASOK was often a junior member of the governing coalition.

Syriza got 16 percent of the vote in the 2012 election when its position on remaining in the eurozone and rescheduling Greece’s debt was ambiguous. After the vote, in the process of moving from an electoral coalition to a party, Syriza made its move to the center clearer: It adopted a position that Greece should remain in the EU and pay off what it owed out of its economic growth.

Running on a platform of “a left government” and “unity of the left” in June 2014 — when the total bankruptcy of the troika’s austerity policy was clear to the Greek people — Syriza got 27 percent of the vote, second to New Democracy.

Polls favor it to finish first in the Jan. 25 elections. Even finishing first, however, is no guarantee that Syriza will be able to form a government.

According to Panagiotis Karystinos of Communist Revolutionary Action (KED), “The KKE claims that Syriza is just one more bourgeois party. Since Syriza does not proclaim to overthrow capitalism or break with the EU, it will do nothing more than an effort to manage the crisis within the capitalist framework. So, no support for Syriza.” Karystinos goes on to say that many organizations of the nonparliamentary left in Greece agree with the KKE’s criticism of Syriza. (personal correspondence)

As conditions for the workers deteriorated, a fascist party called Golden Dawn became much more prominent, getting 7 percent of the vote in the 2012 election up from 0.3 percent in the prior election. It specialized in physically attacking isolated leftists and immigrants. Many Greek leftists suspected the cops played a big role in Golden Dawn. In 2013 the government brought 30 legal cases against Golden Dawn, but didn’t ban the party outright.

The big question in the election is whether pressure from EU bankers and governments will coerce Greek voters into re-electing New Democracy and its platform of austerity on Jan. 25.