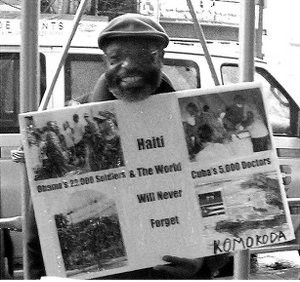 Five years ago, after a catastrophic earthquake killed hundreds of thousands of Haitians and destroyed much of Port-au-Prince, Haiti’s capital, the people of the world were so struck by the devastation and suffering that they donated billions of dollars to Haiti’s relief. A majority of those who donated lived in the U.S.

But the “international community” felt that Haiti’s government couldn’t handle so much money, so they appointed former U.S. President Bill Clinton as head of the Interim Haiti Reconstruction Fund and guaranteed that he would have complete control.

Now $6 billion of these contributions have yet to be dispersed. At a demonstration in New York on Jan. 13, called by the Committee to Mobilize Against Dictatorship in Haiti (Komokoda), Haitians asked, “Where’s the money, Bill?” They also pointed out that then U.S. Secretary of State Hillary Clinton installed Michel “Sweet Mickey” Martelly as president of Haiti to cover up this plunder.