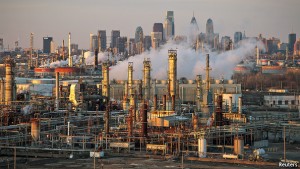 Jan. 12 — As the extent of overproduction in the oil and gas industry sinks in with the markets, oil prices continue to swoon.

One is the continued capitalist economic stagnation, and even decline in some countries, that has affected world demand for oil.

The other is the huge investment made by U.S. oil companies in the last few years that has propelled this country to become the world’s largest oil and gas producer, after having been a net importer of oil just a short while ago.

This combination of increased oil production and less-than-anticipated demand is leading to a new crisis in an area of the capitalist economy that can drag everything down.

While many workers are right now getting relief from lower prices at the pump, this will be more than offset if the crisis triggers a general crisis in the financial markets, which could then ripple out to affect the jobs and income of millions.

Already, several dozen oil rigs have been shut down in western U.S. and thousands of workers laid off. But this may only be the tip of the iceberg. The rapid expansion of U.S. oil production by the mega-corporations that control the industry was financed by big loans from major banks. These banks are now worried about possible defaults on the loans, raising the prospect of another round of bankruptcies.

The title of an article in the Jan. 11 New York Times Business Section warned Wall Street that “As Oil Prices Fall, Banks Serving the Energy Industry Brace for a Jolt.”

The article explained: “Banks have been lending hand over fist to companies in the nation’s energy industry, underwriting bonds, advising on mergers, even financing the building of homes for oil workers. All of this has provided a boon to banks that have been struggling to find more companies and consumers wanting to borrow.

“Yet with the price of crude oil falling below levels sufficient for some energy companies to service their huge debts, strains are being felt and defaults are likely. While it may take some time for the crunch in the oil industry to translate into losses, one thing already seems clear: The energy banking boom is over.”

Making Wall Street especially nervous is the fact that the new oil to come online in the U.S. is much more expensive to produce than that obtained from oil fields in other parts of the world, especially the Middle East. At the beginning of this boom, oil companies took out hundreds of billions in loans to pay for the technological infrastructure that has allowed them to get oil from shale rock through the environmentally destructive process known as fracking.

Huge investments have also been made in tar sands and in attempts to establish oil rigs offshore in the Arctic north of Alaska. A detailed front-page article in the New York Times Magazine of Jan. 4, entitled “The Wreck of the Kulluk,” told of Shell Oil’s unsuccessful effort in 2012 to position a giant offshore drill rig in the Beaufort Sea, which ended in the rig going aground after impossible weather conditions threatened the lives of the entire crew.

This cautionary tale might never have gotten such wide attention were it not for the fact that it is becoming clear to some of the big investors on Wall Street that they may be in for a very bumpy ride.

Part of the oil companies’ strategy seems to have been based on thinking they could capture more of the world market from countries in the Organization of Petroleum Exporting Countries. They particularly wanted to undermine Iran, Venezuela and Russia. But with oil now trading at less than $50 a barrel, and expected to drop even further, the stocks of the companies that started this competitive race by investing so heavily in fracking and other technologies are starting to fall, dragging down the financial markets.

There is no eradicating the capitalist boom-bust cycle. Temporary “bailouts” may drive the basic contradictions of the profit system underground, but they are sure to break out in even more catastrophic forms later on. The only answer is to get rid of capitalist exploitation itself, so the working class can reorganize economic life to benefit all the people, not the privileged few.