On Sunday, Jan. 11, a massive demonstration took place in Paris in sympathy with the staff members of the satirical cartoon magazine Charlie Hebdo who were killed on Jan. 7, as well as a Muslim police officer and four patrons of a Jewish grocery killed in two armed attacks that week.

The primary target of the killings was the staff of the cartoon magazine. The magazine had repeatedly published cartoons insulting Islam and the Prophet Muhammad. They were in the process of designing another offensive cartoon when they were killed.

The French authorities have identified the attackers as Said Kouachi, 34, his brother Cherif, 32, and Amedy Coulibaly, 32. The brothers were French citizens of Algerian descent and Coulibaly was of West African descent. Of course, all the information on these attacks is in the hands of the French police and intelligence authorities. Nothing they say should be automatically accepted.

On the other hand, while some think that the attack was a set-up engineered by Paris, the movement has to deal with this as a political matter and not rely on conspiracy theories, unless significant new information comes to light.

The killings have, of course, been condemned day and night by the big business media in France, across Europe and in the U.S. But also condemning the killings have been the head of Hezbollah, Hassan Nasrallah, as well as Hamas. Both resistance groups have been heroic in their struggle against the Zionist state of Israel and its imperialist backers. Hamas, of course, has led Gaza in its struggle against Israeli occupation.

For progressives and revolutionaries, the events pose several questions and difficulties. Should we condemn the killings? Should the attack be called a massacre, when you consider that, on average, every day last summer for 51 days, four times as many people were killed in Gaza by Israel? But the media and political leaders did not call that a massacre.

Terminology itself is a weapon in the struggle, and the language used by the ruling class cannot be automatically adopted, lest we be misunderstood.

How do we oppose the killings without seeming to chime in with imperialism or lend any tolerance politically to the cartoonists’ attack on Islam, which constituted what many would consider hate speech?

To be sure, the kind of attacks carried out in Paris did not advance the struggle of millions of oppressed Muslims, in either Europe or the Middle East. In fact, they made it easier for the imperialists to mobilize their own population to support Islamophobic repression and military intervention. Even Nasrallah himself was quoted as saying that the attack probably did more harm to Islam than the cartoons. (Huffington Post, Jan. 9)

On the other hand, the loudest denunciations of terrorism have come from the world’s biggest terrorists — the U.S., French, British and other European powers. They try to use revulsion against the attacks to further their goals of racist repression of Islamic residents, increased policing, and escalation of bombing and military operations in Iraq, Syria, Yemen, Pakistan, Afghanistan and other places.

Already, the racist New York Police Department has used the Paris situation to step up its surveillance and to raise false threats to security in order to expand their operation. These alarmist pronouncement and tactics by the NYPD are undoubtedly aimed to undermine the Black Lives Matter movement and burnish the tarnished image of the cops.

The global big-power terrorists want to conceal the origin of the Paris attacks. These attacks must be seen against the background of more than three decades of war against Muslim countries, mainly by the U.S., but in collaboration with others, including France. 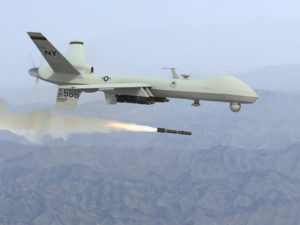 While gruesome photos are shown of the aftermath of the attack on Charlie Hebdo, similar pictures are not shown of families slaughtered by U.S. drone strikes in Pakistan, Yemen or Somalia. Nor does the French head of government, who says, “We are at war with radical Islam,” want to bring up the fact that “France has emerged as one of the most active interveners in the Muslim world, conducting military operations in Libya, Mali, Chad, Ivory Coast, Central African Republic, Djibouti, Abu Dhabi, Afghanistan, Iraq and Syria. Critics accused France of a new era of Mideast and African colonialism.” (Eric Margolis, Common Dreams, Jan. 10)

The war crimes of the U.S. are seared into the memory of the Muslim masses: images of Afghanistan pummeled by smart bombs, laser bombs, bunker-busting bombs and so-called “daisy cutters” — 5,000-lb. bombs that explode above ground and kill everything within a 100-yard radius. Untold numbers have been killed and millions made homeless in Afghanistan alone. This was followed by the “shock-and-awe” bombing of Iraq, including U.S. attacks on Fallujah, with the virtual destruction of that city of 300,000. Then came the images from Abu Ghraib, Guantanamo and other torture chambers set up by the U.S. military and CIA.

The French colonized Vietnam, Cambodia and Laos as well as parts of north and west Africa beginning in the 19th century. The French Foreign Legion, a mercenary force, was infamous for its brutality in the French colonial era. The crimes of imperialism against Muslims and other colonial peoples are too long to list here (see “French imperialism’s brutal colonial rule” by John Catalinotto, workers.org). This is the background to the Paris attacks.

The movement must not let opposition to the killings diminish resistance to the U.S.-French intervention in Iraq, Syria and North Africa just because these imperialists for the moment are fighting ISIS or al-Qaida. The reactionary forces of ISIS and al- Qaida must be defeated by progressive and revolutionary forces within Islamic society on the ground, not by imperialism. A victory for Washington or Paris would be a setback for the oppressed people of the world.

Free speech and the national question

It is a characteristic of French capitalist society and French imperialism that it deals with the national question by refusing to recognize its existence. This insensitive national chauvinism has shaped attitudes. In fact, the left in France has shamelessly adapted to this attitude. This has everything to do with the latest attack.

According to the Jan. 8 New York Times, “In 2012 when Charlie Hebdo editors defied the government’s advice and published crude caricatures of the Prophet Muhammad in naked and sexual poses, the French authorities shut down embassies, cultural centers and schools in about 20 countries” anticipating a violent reaction.

The editor, Stephane Charbonnier, who was killed Wednesday, was intransigent and had been under police guard since 2012. He risked his life for the right to insult a billion oppressed people without restriction or inhibition.

According to the Times, “In the past Mr. Charbonnier vowed that his cartoonists would keep poking fun ‘until Islam is just as banal as Catholicism.’ … [In] its raucous, vulgar and sometimes commercially driven effort to offend every Islamic piety … Charlie Hebdo was in the vanguard of opposition to conservative Islam.”

Charbonnier put an equal sign between the religion of the colonists — the religion of the Crusaders and missionaries who were in the vanguard of colonial enslavement — and Islam, a religion practiced mainly by oppressed peoples who were conquered by colonialism and have been attacked repeatedly by the military forces of Washington, London, Paris, Berlin, Rome, etc.

This attitude is a reflection of French ruling-class society. When the French colonized Algeria, they classified the Algerian people as French and called Algeria a province of France. They even put puppet delegates in the French parliament to sustain the fiction that “We are all French.”

In 2005 when the mainly Arab and African-Muslim youth of the Paris suburbs carried on a rebellion for three weeks against poverty, unemployment and lack of opportunity, one of their demands was to force the French government to keep statistics on how many people in France were of foreign origin. Algerians, North Africans and their descendants who live in France are not counted as foreign. They are just categorized as “French citizens” and therefore cannot prove discrimination on the basis of race or nationality.

Imagine if African Americans were not counted as such or if Chicanos were not regarded as Latino/a by the U.S. government. There could never be an affirmative action program if everyone was just an “American.”

This is the chauvinist attitude that lies behind the magazine Charlie Hebdo. Charbonnier was supposed to be a “leftist.” But no genuine leftist, certainly no communist, could ignore the question of national oppression. This is not a matter of “free speech,” but rather a matter of hate speech that has the result of fueling right-wing, racist forces to carry out discrimination, harassment and violence against Muslims.

The second-largest party in France’s last election and a menacing force is the National Front, a fascist organization that has made Islamophobia and restrictions on the Muslim community the center of its program. These cartoons feed the frenzy of Islamophobia, not just in France but in Germany, where the Patriotic Europeans Against Islamization recently organized 18,000 marchers in Dresden. The Sweden Democrats Party, which is anti-Islamic, draws 15 percent of the vote. The United Kingdom Independent Party, the Golden Dawn in Greece and other right-wing, fascist and Islamophobic parties are growing in the atmosphere of the capitalist economic crisis.

High unemployment and poverty are creating the ground for racism and divide-and-conquer tactics.

The democratic right of free speech for progressives, workers, oppressed communities and all organizations that have to fight against capitalist reaction is extremely important. This right, however, is highly restricted in capitalist society because the rich own the media, the publishing houses, the film studios, the great printing establishments and paper supplies, etc., while the bourgeoisie has its point of view put forward 24/7 every day and in every way.

But the “right” of the Ku Klux Klan, the John Birch Society, the Tea Party, etc., to vilify African Americans, Latinos/as, immigrants, women and lesbian-gay-bi-trans-queer people should be suppressed by the people themselves in a struggle against these hatemongers. In the same way, the progressive forces in France should wake up and shut down the racist forces spawned by French imperialism.

Above all, the movement in the U.S. has to guard against the continued step-up in racism, Islamophobia and intensification of police activity on the local and federal level.