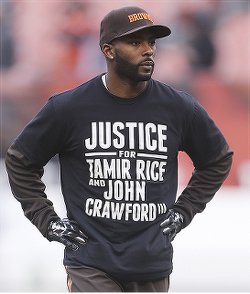 The current national uprising against police violence dominates the U.S. political terrain. The revolt began with the Ferguson, Mo., rebellion, ignited by the broad daylight police murder of African-American 18-year-old Michael Brown by a white cop on Aug. 9. Black youth who racist white police officers humiliated, terrorized and demonized day in and day out proclaimed defiantly in the streets that enough is enough — despite the cops’ tanks, rubber bullets and tear gas.

This resistance Ferguson youth started has spread like an inferno throughout every part of the U.S. in the last four months. It gained greater momentum on a national scale when a grand jury denied justice to 43-year-old African-American Eric Garner by refusing to indict the white cop who killed him, even though millions heard Garner plead, “I can’t breathe” on video. This ruling came just nine days after a grand jury had refused to indict Darren Wilson for murdering Brown.

The cop murders of Brown and Garner and the response to them have helped bring necessary national attention to other police murders, especially of Black and Brown youth like Tamir Rice, John Crawford III and Akai Gurley — to name a few.

The growing mass struggle has also impelled famous athletes to stand up against police brutality in greater numbers than since the height of the Black Liberation struggle in the 1960s. Many athletes are wearing “I can’t breathe” T-shirts. This includes entire National Basketball Association teams and star players such as the Los Angeles Lakers, notably Kobe Bryant; the Cleveland Cavaliers, notably LeBron James; the Chicago Bulls, notably Derrick Rose; the Sacramento Kings and the Phoenix Suns. Entire college basketball teams like the Georgetown Hoyas and the Notre Dame women’s squad have done the same.

The professional athletes getting the most attention play the most popular sport in the U.S. under the National Football League. This was brought home when five members of the St. Louis Rams came out on the field Nov. 30 with their hands up — emulating Michael Brown’s “Hands up, don’t shoot” — and when the Cleveland Browns’ Andrew Hawkins wore a “Justice for Tamir Rice and John Crawford” shirt during the Dec. 14 pre-game warm-up. These actions enraged police departments in their respective cities. All the players are Black.

The St. Louis and Cleveland police departments demanded apologies from the players and the teams’ management. No apologies happened. That indicates the powerful impact this uprising has had on athletes of color. It even affects the rich bosses of these teams, who fear any backlash from their own players and fans.

In a moving Dec. 15 interview, Hawkins explained, with tears in his eyes, that when he witnessed the video tape of 12-year-old Rice being killed in a park by Cleveland police, he thought about the safety of his 2-year-old son and also the pain the Rice family is going through. He also stated that although he was worried about the reaction he might receive by wearing the shirt, he felt he had no other choice. (cleveland.com, Dec. 15)

Seventy percent of the NFL players are African American and other players of color. Even though racist police want them silent, more and more are speaking out over injustice. Despite being well-paid, they still feel the sting of racism. And on the other side of the barricades, the police are feeling the well-deserved sting of deepening animosity and isolation from mainstream U.S.