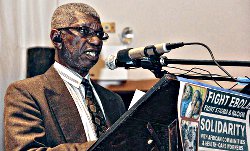 Harlem, N.Y. — An all day rainstorm could not keep people from attending a Solidarity Rally Against Ebola, Stigma and Racism at the National Black Theatre in Harlem, N.Y. on Dec. 9. The program sponsored by the African Ebola Crisis Committee and the International Action Center showed what a people’s response to an epidemic, led by those most affected, would look like.

Two of the speakers, Taegbo Porte and Oretha Bestman Yates, are originally from Liberia and represent the Liberian community centered in Staten Island. They explained that Ebola came after a decade of civil war devastated the infrastructure of their country. 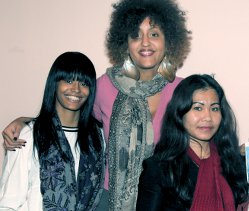 This outbreak of the disease is now adding tremendous strains to Liberian society and increasing the misery of the poorest Liberians. Ebola survivors face social isolation, which makes it very hard to find food and shelter. Those living under quarantine and patients’ families face starvation.

Sahid Koromah, representing the U.S. Sierra Leonean Association, said that the number of people with Ebola in Sierra Leone surpassed that of Liberia, and that his group is working people-to-people, not with the government.

Donat Bukaba, a representative of the Rwandan community in the New York metropolitan region, raised that young children from Rwanda — an African country thousand of miles away from any Ebola cases — were kept out of school in Connecticut because the frenzy over the disease had created a stigma against all Africans. He called for the unity of all African communities in the U.S.

Dr. Margaret Stevens, director of Urban Issue Institute at Essex County Community College in New Jersey and on the National Board of Veterans for Peace, said that Essex students are working on radio lessons for countries where classes are closed because of Ebola.

Marcelo Maia of ACT-UP NY, discussed the stigma he faced around HIV-AIDS. His group held a rally at Bellevue Hospital on “ACT-UP Against Ebola.”

Larry Holmes, of the Peoples Power Assembly, told of the current struggle against police violence in the U.S. He explained that the struggle to overcome Ebola in West Africa has been intensified due to the devastation left by the former colonial powers in the three countries: the United States in Liberia, Great Britain in Sierra Leone and France in Guinea.

Charles Jenkins, president of the Coalition of Black Trade Unionists in New York, said that TWU Local 100 will set up a committee concerned with Ebola as part of their health care work.

Gail Walker, co-director of the Interreligious Foundation for Community Organization/Pastors for Peace, talked about the contributions Cuba is making. The socialist country has sent hundreds of doctors to West Africa.

Dr. Hillel Cohen, an epidemiologist, talked about the necessity for medical quarantines and isolation. If done humanely and justly, with economic compensation, including wages, paid to the ill, it would cost billions of dollars. That is why the big Western countries, like the United States, Britain and France, skirt this issue.

Larry Hamm of the Peoples Organization for Progress said: “Racism, colonialism, imperialism, capitalism are deadly diseases that kill more people than Ebola. The spread of Ebola is a manifestation of underdevelopment.”

Johnnie Stevens, IAC speaker, wrapped up the meeting by pointing out it was “a step in building solidarity with the African communities and the health care workers.” He stressed, “We must become a fist to crush racism and Ebola.”

Cultural contributions to the evening included Liberian vocalist David Mell performing his “Prayer against Ebola,” (video at tinyurl.com/myzrawo) and the precision rhyming of hip hop originators Rodney C! Stone and the Ground Breakers with two songs on Ebola Awareness (listen at thedrammehinstitute.org/news)

Sara Catalinotto and Johnnie Stevens contributed to the article. See a slide show of the program at ­tinyurl.com/kobdla3.