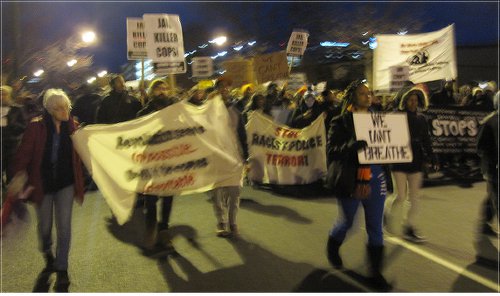 Syracuse, N.Y. — In bitter cold, 300 protesters marched from Syracuse University into downtown Syracuse in a militant outcry against racism and police brutality. Bridging campus and community, the protest brought together local activists, parents with babies in strollers and Snuglis, children on scooters and a core multinational crowd of students.

This Dec. 8 march was called by THE General Body, an SU “united front of student organizations,” the anti-corporatization multi-issue group that occupied the SU administration building for 18 days earlier in the fall.

At a brief opening rally, speakers for the “March for Justice: We Can’t Breathe” protest denounced “white-collar war criminals” and Black lynchings, “where the rope has been replaced by the hand of police holding a gun.” One speaker said of the marchers, “We are the resistance, we are the change, we are the future.”

The Syracuse community members and SU students, teachers and staff then marched to Bird Library, where they held a four-and-a-half minute “die-in” while names were read of people of color killed by police.

As night fell, marchers headed downtown through rush-hour traffic, chanting, “Resistance is justified, when people are occupied!” and “How do you spell racist? U.S.A.!”

They sat down, blocking traffic, on the streets in front of the Syracuse Police Department and the Onondaga County Courthouse. Family of people killed in Syracuse police custody spoke about the deaths of their loved ones.

The local Southern Christian Leadership Conference chapter president, Dr. L. Micah Dexter, said: “From Syracuse to Gaza to Ferguson, resistance is justified. You have the right to rebel.”

As the crowd marched back to campus, chanting, “You can’t stop the revolution!” residents from a nearby low-income housing project came out to greet them, with hands raised in the now universal “Hands Up, Don’t Shoot” gesture from the Ferguson, Mo., uprising.