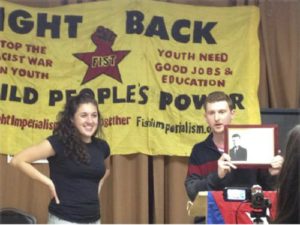 FIST — Fight Imperialism, Stand Together — is proud to have published the first issue of Red Flag, a new magazine of theory and struggle written for and by young revolutionaries. With eyewitness accounts of peoples’ struggles, Marxist analysis of current events and revolutionary theory ranging from basic to advanced, it is hoped this magazine will be a tool for building the movement against imperialism, capitalism and all forms of oppression. The first issue features articles on the Ferguson, Mo., rebellion.

In New York City, FIST held a forum and discussion on Nov. 2 titled “Solidarity & struggle, the fight against capitalism.” The forum brought together a discussion of many different struggles and the importance of solidarity.

Ramiro Funez, a FIST organizer, spoke on immigrant rights activism, the struggle against neoliberalism and his participation in the Solidarity Caravan to the Mexico/Texas border in October. Funez stressed the importance of uniting struggles, in particular showing solidarity with and links among the immigrant struggle, the rebellion in Ferguson and the resistance in Gaza.

Desiree DeLoach, an Occupy activist, spoke about her experiences in Cuba with the Venceremos Brigade and defended Cuba’s socialist process as a model for a better world. This writer spoke on anti-imperialism, with a focus on current U.S. wars and occupations in the Middle East. Caleb Maupin closed with a talk on the importance of Marxism-Leninism in building a revolutionary movement in the 21st century United States.

McMillan was presented with the “John Brown Award for Opposing Injustice” from NYC FIST for her continued organizing work against mass incarceration and the horrible abuses and conditions at Rikers.

To view videos of the forum talks, the NYC FIST Chapter’s YouTube channel is http://tinyurl.com/nycfist.