With a demonstration that started at the entrance to the Great Hall of the University of California at San Diego on Nov. 5, people in southern California joined the hundreds of thousands of outraged people nationally and internationally who are demanding that 43 missing Mexican student activists be found and brought home alive.

They had heard that Arturo Sarukhan, former Mexican ambassador to the U.S., was scheduled to speak there on the “success” of the North American Free Trade Agreement. The action really began inside the hall as entering protesters held up pictures of the 43 kidnapped students from Ayotzinapa teachers’ college in the Mexican state of Guerrero.

The protesters marched back outside when Sarukhan began to speak lies about the supposed benefits resulting from NAFTA. UCSD students shouted that they had not authorized using their tuition money to pay travel, hotel, food and after-event party expenses for a conference glorifying NAFTA. Finding the missing students and stopping the violence should have been the topics of this conference. 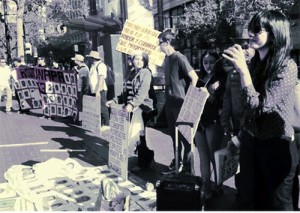 Berta Gutierrez, one of the main organizers of the protest, asked: “What if one of the missing of Ayotzinapa was your relative, your son, your brother. … We must speak up and raise consciousness! We call on community groups and social justice organizations to join the call of the families and friends of the 43 normalistas who are missing in Iguala, Guerrero.”

Participants lit 43 candles, placing them atop the many signs, while they continued to hold up pictures of the students. The protest ended with people calling out the names of all 43 and demanding they all be brought home alive.

Demonstrators in New York gathered Nov. 5 before the Mexican Consulate at noon for a news conference. They then marched and protested until the evening, with a half dozen arrested at a civil disobedience action.

In the midst of a warm, sunny San Francisco day, a group of Latino/a activists and students from around the Bay Area performed street theater on Nov. 9, speaking and acting out the disappearance of the Ayotzinapa students. They loudly called out the names of each missing youth while a large crowd gathered. Tourists who stopped to watch were urged to take pictures and send them back to their friends and families. 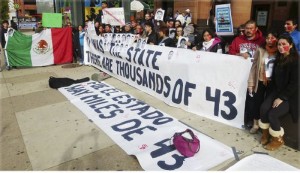 Photos of all the missing students were visible throughout the protest. The street theater ended when the young people fell to the ground, enacting a die-in. The imprints of their bodies were chalked on the sidewalk.

“Just like in Oakland and Ferguson, we have faced similar brutality and murder in Guerrero. We are all wounded. We are demanding justice and the resignation of the president of Mexico, Enrique Peña Nieto,” said Diana Gameros, a local Latina artist and organizer.

Another protest and march is planned for Saturday, Nov. 15, at 12 noon at 24th and Mission in San Francisco.

Protesters, mostly migrant workers and students from Mexico and other Latin American nations, demonstrated in front of the Mexican Consulate in Philadelphia on Nov. 9. Many had marked their faces with red paint, signifying the bloody hands of the Mexican state. Speakers and signs criticized not only those who attacked the students in Guerrero on Sept. 26 but also the whole corrupt government responsible for thousands of other students, workers and Indigenous women and men kidnapped and murdered by municipal police and drug gangs.