The Block the Boat Coalition marches in solidarity with Palestine. Oakland, Calif.

Oakland, Calif. — More than 200 pro-Palestinian protesters marched from the West Oakland Bay Area Rapid Transit station to the Stevedoring Services of America terminal at the Port of Oakland on Oct. 26. They were celebrating the failure of the Zim Beijing container ship to arrive at the port for unloading and, in the words of organizers, “show[ing] Zim what they can expect if they try to come back. Let’s show the world that the Bay Area says no to Zionism.”

The Block the Boat Coalition had led the effort that kept the Zim Piraeus from unloading the bulk of its cargo in Oakland over the course of four days starting on Aug. 16. They declared the Zim Beijing, originally scheduled to arrive at the Port of Oakland on Oct. 25, its new target. 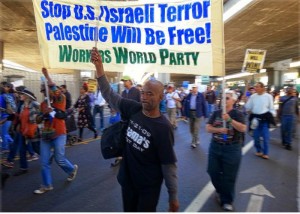 After Block the Boat declared its plans, the Zim website dropped Oakland from the ship’s schedule. However, marinetraffic.com reported that the ship never changed its Oakland destination. As of this writing, the Beijing continues to head west and is more than 1,100 nautical miles away from U.S. shores.

According to JWeekly.com, a Jewish Bay Area newsletter, “While the Zim Integrated Shipping Services website lists the vessel for an Oct. 25 arrival, the schedule shows no more Zim dockings in Oakland beyond that date, and a report on TheJewishPress.com noted that Zim ‘may not call Oakland home again.’” (Oct. 16)

The Block the Boat call states that “the military assault on Gaza — which killed more than 2,200 Palestinians and left more than 100,000 homeless — has halted, thanks to the Palestinian resistance, but our struggle is not over. With the full support of the U.S. government, Israel continues to carry out its brutal occupation, confiscate more land and build more settlements, imprison thousands of Palestinians and maintain the siege on Gaza as part of its policy of ethnic cleansing.

“The apartheid state of Israel not only impacts Palestinians, but also plays a role in the oppression of communities all across the globe. The Zim shipping line is instrumental in upholding this system of global repression. There are direct ties — training, weapons and surveillance — between Israel’s occupation of Palestine and the increasingly militarized occupation of black and brown communities in the United States. And it is now a well-known fact that police departments in and around Ferguson, Mo., have received training from Israel.”

Solidarity actions were held in conjunction with the Oakland action at the Israeli Embassy in New York City and in Baltimore. Last week, Block the Boat Los Angeles held off the unloading of the Zim Savannah for two-and-a-half days.