A million Italian workers march in Rome against austerity law.

In a rare note of agreement, the Wall Street Journal and Novosti, a Russian newspaper, agree on the large size of a workers’ anti-austerity demonstration: 1 million. That is the number of Italian workers who marched to the Piazza San Giovanni in Rome on Oct. 25 to protest a new labor law rammed through the legislature on Oct. 9 by Italian Prime Minister Matteo Renzi.

How does this struggle affect the U.S. working class — and the workers of the world for that matter?

European capitalism is headed into its third recession since 2007. It has not been able to recover from the economic crisis by conventional austerity measures. Their new strategy is to grow out of this crisis by expanding exports.

But in order to expand exports and compete in the world capitalist market, the European capitalists have to bring down their prices to be “competitive.” Workers in the U.S. know that when they hear the bosses talk about being competitive, it means cutting wages and benefits while increasing layoffs. 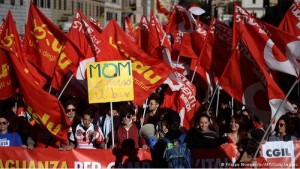 Marxism shows that the working class is a global class bound together by common exploitation. The fate of one section of the working class is inseparable from the fate of the class as a whole — from Johannesburg to Bangkok, from Lima to Cairo. This is the foundation of communist proletarian internationalism.

If the Italian regime succeeds in pushing through its vicious attack on the wages and rights of Italian workers, it will lay the basis for this to spread to the rest of Europe and will put additional pressure on conditions for the U.S. working class as well.

In an article in last week’s Workers World, we showed how in the era of globalization and capitalist economic crisis of overproduction, each ruling class tries to climb out of its crisis by exporting — because the workers at home don’t have enough money to buy back the goods produced. Thus the bosses go abroad. They cut each other’s throats to get overseas markets. In order to keep costs down, they intensify their attacks on the working class.

If the capitalists of Europe challenge U.S. capitalists by driving down the wages of European workers, the bosses here will put pressure on already depressed U.S. wages to meet European competition.

The bosses and governments of Europe have been crying about the need to generate “growth” — meaning growth in profits. They have tried government bailouts, pumping money into the banks, and cutbacks in government spending, among other things — all to get money into the hands of the bankers and industrialists. But nothing has worked. Indeed, capitalism in Europe, like capitalism around the world, is at a dead end.

The workers in Rome, led by the General Confederation of Italian Labor (CGIL), were protesting the “stability law,” a plan directed specifically at the wages of permanently employed workers, which is part of the new phase of European austerity. The central element of the “stability law” is “labor market reform.”

The previous phases of austerity in Europe have been directed at government spending on social services, the sell-off of public facilities to private corporations, pension and benefit cuts, government and corporate layoffs, and so on.

But the conventional wisdom of the financiers and corporate rulers is that wages have to fall further and their freedom to lay off workers must be increased in order to fight their capitalist rivals in the export markets and make investment profitable.

This type of attack on wages has already been carried out in Spain. It did boost Spain’s exports, but this was made easier for the bosses by the fact that Spain’s official unemployment rate was 25 percent and youth unemployment was over 40 percent.

Italy, with the third-largest economy in the 18-member Eurozone, is next in line. The government of President François Hollande in France and its capitalist masters are watching Italy’s attacks on the workers intently, because France is slipping into recession and is planning its own “labor market reform.”

This is all being done under the whip of the German ruling class and the government of Chancellor Angela Merkel, along with steady pressure from the International Monetary Fund. The summits of finance capital are fearful of an economic collapse and are demanding that the ­European governments make the workers pay to reverse the downturn.

This development was well explained by economic writer Jack Rasmus in an Oct. 21 article in CounterPunch. Rasmus shows the economic numbers driving the new strategy and how the economic downturn is now threatening France and Germany, the two biggest imperialist powers on the European continent. He then writes about the explosive unemployment numbers.

“Perhaps the best indicator of the deep weakness of the Eurozone economy today is its labor market. In the region overall, unemployment has remained consistently in the 11%-12% range for more than five years now. In Italy more than 12%, France 10.5%, and Spain still nearly 25%. But the picture is even worse than these often reported general job statistics. Youth unemployment rates in both Italy and Spain, for example, are 45% plus. And those youth who have been able to obtain work have been largely limited to part time and temp work. In France the percent of youth in the workforce age 15-24 who are employed as temps has risen to 59%. In Germany 52%, Italy 54%, and in Spain an incredible 65% can only find temp work, when any work at all.

“And it’s not just age 15-24 youth workers. In Italy, 70% of all new hires have been temp workers. Temp means lower wages, fewer benefits, far less job security, and employer ‘rights’ to lay off and fire at will. The chronic high unemployment and the large number of low-wage temp jobs translate into wage compression in general, with few exceptions, for the rest of the Eurozone working class.

“Nevertheless, the target of the ‘new model’ austerity now on the Eurozone agenda is designed to extend and deepen that wage compression by introducing what is being called ‘labor market reform.’ In addition to high unemployment and temp hiring, which will continue as a dual force already depressing wages, the new third force of ‘labor market reform’ will extend wage cutting further, targeting the non-temp, permanent Eurozone working class in Italy, France, and elsewhere in particular.”

That is precisely what is happening in Europe in general. Right now, the cutting edge of the battle is shaping up in Italy.

According to Rasmus: “Not all the details are apparent as yet, but some outlines are. About one fourth of all of Italy’s 25 million workers are the target of the new reforms. What is known so far is that Italy’s new ‘labor market reform’ rules will make it easier for employers to hire and fire workers — both newly hired permanent workers as well as temp workers.

“New hires’ benefits, severance pay, and rights will also be reduced when initially hired, and only slowly ‘phased in’ as they gain seniority on the job. Limits on workers’ collective ability to wage bargain are reportedly to be part of the new ‘reforms’ as well, although details so far are lacking what this will mean. [Prime Minister] Renzi’s reforms include reducing costs by business tax reduction. Business labor tax cuts equivalent to 32 billion Euros are part of the Renzi reforms. Declining tax revenues will likely require more government spending reductions, thereby ensuring traditional austerity measures will continue as well.”

All the wealth of society is created by the workers. This wealth should belong to them collectively to be used for their well-being. The workers should not have to sell their labor power to greedy, money-grubbing bosses year after year for the right to be exploited. The destruction of capitalism and the establishment of socialism, a system based on human need and not capitalist greed, is the only long-term way out of this nightmare we are facing.