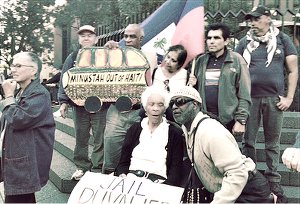 An emergency demonstration was held in San Francisco on Sept. 30 in defense of former Haitian President Jean-Bertrand Aristide. About 50 people rallied at Montgomery and Market streets because of threats to President Aristide’s safety. Speakers described how on Sept. 27, masked Haitian police had surrounded Aristide’s house as Haitian radio stations broadcast news that he would be immediately arrested. They said hundreds of people had rallied in front of the house, vowing to stay there to prevent his arrest.

Speakers said this was the current Haitian government’s response to the Lavalas Movement’s call for demonstrations marking the anniversary of the Sept. 30, 1991, coup against President Aristide. It is part of a pattern of intimidation that harkens back to the days of the Duvalier dictatorship. The U.S. government, in collaboration with the right wing in Haiti, had covertly organized the coup and forced Aristide into exile, flying him to the Central African Republic, where he was held as a virtual prisoner.

This Sept. 12, the Haitian government removed the security detail that had been guarding the former president and his family since his return to Haiti in 2011. This came a day after a judge ordered President Aristide, Haiti’s first democratically elected president, to be placed under “house arrest.” Under current Haitian law, “house arrest” does not exist, but it was used frequently as a form of repression by the Duvalier regime.