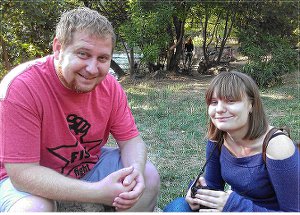 Simferopol, Crimea — Svetlana Licht is a trade union activist and leader of the Marxist Union Borotba (Struggle) of Ukraine. Forced to leave Kiev after the U.S.-backed far-right coup, she went first to Kharkov, where she helped to lead the city’s anti-fascist protest movement, known as AntiMaidan. In May, a death squad attempted to kidnap Licht’s companion and fellow union activist Denis Levin. They fled to her native city of Donetsk, capital of the recently liberated Donetsk People’s Republic in the majority Russian-speaking Donbass region, where she lived through the brutal Ukrainian military siege this summer. Licht recently arrived in Simferopol, Crimea, where Workers World spoke with her in September.

Workers World: What was it like growing up in Donetsk after the destruction of the Soviet Union?

Svetlana Licht: Growing up in the Donbass was no different from any other industrial region of the former Soviet Union: widespread poverty, unemployment and collapse of production. I think that in many ways the period is very similar to the beginning of the decline of Detroit. Only there is one difference about the post-Soviet countries: the majority of people, for example, residents of Donbass, remember who built our industry, science and culture in the region. It was built by the Soviet people. They remember how life was in the Soviet Union, when there was work and social protection.

With the decline of industry, there was a decline of culture and education. History textbooks were rewritten several times. Every year, there were more and more myths of Ukrainian nationalism and vilification of the Soviet period. This was serious ideological indoctrination for the destruction of remaining social programs and to promote a full transition to capitalist market relations in all spheres of life. After all, nationalism — Ukrainian or Russian, it does not matter — is the chief defender of the commercialization of all spheres of life. In the first place, it is directed against the Soviet experience of building socialism.

WW: How did you experience the division between western and eastern Ukraine?

Svetlana Licht: I graduated in 2005 from the second Ukrainian language school in Donetsk. Most of the teaching staff came from western Ukraine. In 2004, most of the teachers began to espouse moderate nationalist positions. There were also outspoken nationalists who were not ashamed before anyone, not even children. For example, in the midst of the Orange Revolution [an earlier right-wing uprising] in 2004, my history teacher told us that those who live in the Donbass are only cattle and lumpen and similar social-racist stuff. But there were also those who, on the contrary, strongly emphasized their unwillingness to introduce this political agenda in the learning process. So my generation of Donetsk Ukrainian school graduates are skeptical of such things as nationalism and “revolutions of honor.”

In pre-war Ukraine, most people were sensitive to the difference between the views of people from different regions of the country. We have different histories, different economic development. People understood this, even in spite of the propaganda that attempted to divide inhabitants of different regions on territorial and cultural grounds. If people had more opportunities to travel around the country, they would see that the workers live the same everywhere, that all who sell their labor power share common problems and troubles that they can solve only by uniting as a class.

WW: Tell us about your activity in Kiev before the February coup.

Svetlana Licht: I worked as a union organizer, along with Denis Levin, in rail transport. One of our most successful campaigns was against the privatization of the Ukrainian railways, which managed to unite passengers, railway workers, civic organizations and trade unions.

In 2012, we began to organize actions and social networks on the topic. Together with the trade unions, we demanded that the government stop the looting and privatization of rail transport. And the government was going to negotiate and make concessions.

In 2013, we launched a campaign to establish independent trade unions for Kiev public transport workers. By the beginning of the Maidan movement [pro-imperialist protest movement led by fascist gangs and funded by Washington], we had already won a couple of small victories. After the destruction of the headquarters of Borotba in Kiev, we had to leave the city.

WW: After the February coup, you went east to Kharkov, Ukraine’s second-largest city. What was your work in the AntiMaidan movement? Why were you forced to leave Kharkov?

Svetlana Licht: We mainly engaged in propaganda activities. There were workers who undertook printing leaflets. We formed committees and organized people to campaign in the city, to spread the message. Together with Kharkov civil initiatives, we began to organize anti-war actions in early April, drawing many women anti-fascists. But in late April, the police attempted an illegal search of the Kharkov Borotba headquarters. Before that, there was a wave of arrests of those who took part in the second capture of the Kharkov Regional State Administration building — more than 100 people were arrested. Because of the repression, activities of Kharkovites began to fall sharply.

Then came the May 2 Odessa tragedy [when at least 48 anti-fascists were killed by neo-Nazis at the House of Trade Unions]. Fewer people came out onto the streets. On May 8 — just before Victory Day [anniversary of the Soviet victory over German fascism in World War II] — the Security Service of Ukraine (SBU) illegally seized our headquarters, destroyed everything and took all the newspapers, leaflets, flags, sound-amplifying equipment and generator. This was done to prevent us from taking action on Victory Day. But we still participated in a citywide protest which attracted several thousand people.

Although the activity of the people receded, we still made leaflets. Many people in Kharkov had already become activists, and they began to organize help for political prisoners and conduct anti-war actions. By the end of May a more-or-less permanent core of Kharkovites had formed who continued to meet on Freedom Square under the statue of Lenin. The group ranged from 150 to 300 people.

In late May, SBU agents attempted, without charges, to kidnap Denis Levin directly from the square, and then we left the city. A small number of people continued going to the monument of Lenin all summer to protest against the war.

WW: How was life different in Donetsk when you were there during the so-called Anti-Terrorist Operation? How did people you know respond?

Svetlana Licht: Hundreds of thousands of people left Donetsk. Workers remained at only a few companies. Public utilities and municipal enterprise [workers] in the city worked hard, trying to provide water and electricity. But it was just a heroic job as attacks occurred every day.

Every day, dozens of people were killed.

Those who remained in the city had real courage. People were angry at the junta, but tried not to lose heart.

Almost every night, there was impenetrable darkness in my area of the city. People did not want to turn on the lights, read or watch the news — every day they could hear with their own ears what was happening in the city. And the lies of the bourgeois media only further inflamed their pain and anger.

Here is one of the most memorable days: One afternoon we heard loud explosions not far from our house. With terrible despair, our neighbor cried out, “These bastards bombed the hospital!” And from the news, we learned that several shells fell inside the dental clinic 500 meters from our house. The same evening in a house opposite ours, a man was loudly blasting Soviet pop music. He stood on the balcony and smoked. All his neighbors began to ask why he played this comforting music. To which he replied: “They want us to be afraid and stop enjoying life. This is my answer!”

WW: How do you see the civil war between the People’s Republics of Donetsk and Lugansk and the Kiev junta?

Svetlana Licht: I believe that the people’s republics are a response to the lies, violence and propaganda of the fascists, oligarchs and nationalists.

WW: What future do you see for the workers of Donbass and Ukraine?

Svetlana Licht: I believe that from a historical perspective, victory belongs to the working class and socialism, and I am looking forward to the future.

As long as the war drags on in Ukraine, the crisis will worsen. But those who believed the nationalist propaganda will see through the lies and realize that another world, another way, is possible.

WW: What is your message to the workers and youth of the United States?

Svetlana Licht: Unite everywhere and always. Never forget who your class ­enemy is.