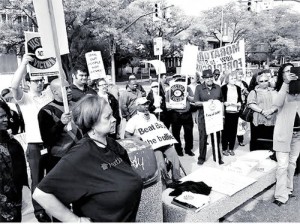 Detroit — Mel Watt, head of the Federal Housing Finance Agency (FHFA), was confronted by protesters as he convened a “town hall” meeting in Detroit on Oct. 2. Recently appointed by President Barack Obama, Watt oversees the federally controlled Fannie Mae and Freddie Mac mortgage giants. He was in Detroit to promote federal mortgage relief programs that have been dismal failures.

Called together by Detroit Eviction Defense, housing activists gathered outside the main Detroit Public Library. The picket line was bolstered by large delegations from United Auto Workers locals 600 and 140, as well as the International UAW staff. Signs, banners and chanting called for a moratorium on foreclosures and evictions and raised the demand, “Bail out people, not banks!”

Laying down their signs, over 100 demonstrators then streamed into the public meeting. Homeowners and anti-foreclosure activists challenged Watt on why Fannie Mae and Freddie Mac side with the banks when these rich institutions are challenged for having refused to abide by federal guidelines mandating loan modifications. They also demanded to know from a Treasury Department representative who was on the panel why “Helping Hardest Hit Homeowner” funds are being utilized to tear down homes in Detroit, rather than to help keep families in their homes — as the money was originally intended.

Detroit Eviction Defense delivered a letter from Americans for Financial Reform and a list of nearly 300 Detroit organizations that support “principal reduction” — which would reduce borrowers’ costs. A list of 17 cases in which Fannie Mae and Freddie Mac are illegally pursuing eviction of Detroit homeowners was presented to Watt.