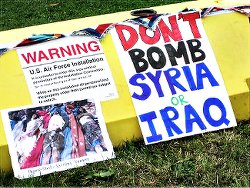 Syracuse, N.Y. — In continued resistance to escalating U.S. wars, 75 people marched and rallied at the gates of Hancock Air Force Base here on Oct. 5. The marchers came from across the region, including Buffalo, Rochester, Utica, Albany, Ithaca, Binghamton and Syracuse itself.

Speakers, signs and fliers at the rally called for an end to U.S. drone attacks and war drives against Afghanistan, Iraq, Pakistan, Palestine, Somalia, Syria and Yemen. Rights groups estimate U.S. drones have killed thousands of people in those countries since 2002.

Hancock is the ground-control station for pilotless Reaper drones that are guided to their targets by members of the 174th Attack Wing, New York National Guard, and can launch “Hellfire” missiles.

One protester read a “People’s Order of Protection” previously delivered against the commanders of the base, demanding an end to the Reaper attacks.

Another speaker turned and directly addressed the soldiers on guard lining the base’s fence. He told them that war crimes were being committed at Hancock Air Base and that, under the Nuremberg Principles, their responsibility was to refuse to obey those orders. The Nuremberg Principles were codified after World War II during the trials of Nazis for war crimes.

Protesters linked war abroad to conditions inside the U.S. One person stated that the domestic cost of escalating aggression was a war on poor people in the U.S. Another held a sign calling for an end to “killing children from Ferguson to Afghanistan.”

The event was organized by the Syracuse Peace Council as part of a Global Action Day against the use of drones for surveillance and killing, called by “Know Drones.”