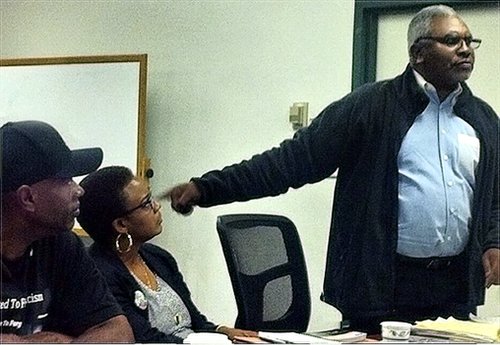 “What’s happening in Ferguson isn’t rioting, it’s rebellion. And this isn’t the first time in our history we’ve rebelled,” declared Clarence Thomas, a rank-and-file member of the International Longshore and Warehouse Union and co-chair of the Million Worker March. Thomas was speaking at a Workers World Forum held at Laney College in Oakland, Calif., on Sept. 29, and co-sponsored by the Laney Black Student Union.

The forum’s theme, “Occupation Is a Crime from Ferguson to Palestine,” linked these struggles with talks by Nadia Gaber from the Block the Boat Coalition and family members of young Black men killed by the police: Jeralynn Blueford, mother of Alan Blueford, who was slain by Oakland police, and Cephus “Uncle Bobby” Johnson, uncle of Oscar Grant, slain by the BART transit police. They talked about the connections between militarization and police repression, from Oakland to Ferguson, Mo., to Palestine. Thomas declared at one point: “I’m not afraid of ISIS. I’m afraid of the police!”