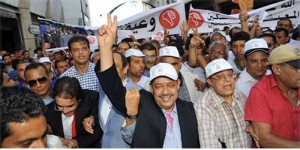 Moroccan workers in the public sector are under attack by the state, which has decided not to talk to their unions, just to impose pension cuts and other changes that will make the workers much poorer.

Four of the five major public sector unions walked off the job on Sept. 23. The only one that didn’t was a small union, closely tied to the party running the government.

The unions on strike estimated that between 70 and 85 percent of the workers in the public sector, which in Morocco includes mines and cultural workers, walked out. The union representing workers in higher education said that participation was 100 percent in the universities of Oujda, Rabat, Casablanca, Fès, Agadir and Meknès.

The main issues in the strike — other than the government not discussing with the unions what it was going to do — were changes in retirement: raising the age from 60 to 65, increasing workers’ contributions from 20 percent to 28 percent and basing pensions on the last eight years of work. The unions calculated these changes would reduce pensions by 25 percent to 30 percent. (PCF-Solidarité International)

Both King Mohammed II and the Islamic movement in Morocco claimed that the strike was an attack on the world of work. (Libération-Maroc, Oct. 23)