The following excerpts are from a statement released by the “Hands Up” coalition, comprised of mainly St. Louis County activists, including from Ferguson, Mo., who have announced a mass mobilization in Ferguson from Oct. 9 to Oct. 13 to demand Justice for Michael Brown. Email [email protected] or go to handsupunited.org. 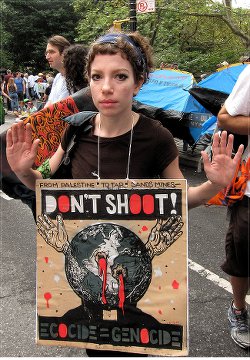 We are in a movement moment.

What began as a local call for “Justice for Mike Brown” has grown into a nationwide shout for justice. Mike Brown falls in a long line of others killed as a result of systemic racial bias and violence against black and brown communities. John Crawford III, Ezel Ford, Eric Garner, Oscar Grant, Amadou Diallo, Marilyn Banks and countless others named and unnamed have been killed through the excessive use of force by law ­enforcement.

As droves of people, many of them young and black, took to the streets of Ferguson in resistance and to demand justice for Mike Brown, thousands of others joined in solidarity around the country. The interconnectedness of our struggles became clear. Police brutality and excessive use of force against young people of color, militarized policing, poverty, economic inequality and the absence of real participatory democracy deeply harm our communities from Dayton, Ohio, to Los Angeles, Calif.

The uprisings in Ferguson and mobilizations around the country represent a desire by community members to claim their right to self-determination, energy to strengthen a movement for racial justice, and to end violence against black and brown communities.

We are calling for a convergence in Ferguson, Mo., from Oct. 9th to 13th to continue the fight for justice for Mike Brown and to spark the broader movement for racial justice and sow transformative seeds for others to carry back home. There is an urgency in this moment to strengthen the mobilizing, organizing and resistance happening across the country to build a movement.

If you want to join in this national fight, sign up to organize locally and come to Ferguson, Mo., Oct. 9th to 13th.

This mobilization is centered around the following key values:

* There is a prevailing need to empower individuals and communities with the knowledge and resources they need to transform the world around them.

* Constant struggle and vigilance are necessary to protect our rights and achieve the justice that we seek.

* Our shared oppressions cannot be reduced to the personal; our issues are systemic, so the solutions should be as well.

* Our current economic system degrades people of color and low-income people — justice must address the economic inequality built into the capitalist system.

* We believe that movements are based in local struggles; sometimes, like here in Ferguson, our movements find a crack where we must all push together. We are fighting for Justice for Mike Brown, for many others murdered by the police and for people of color as a whole.

Thousands of leaders from around the country will arrive in Ferguson on October 9th and 10th. Hands Up United will hold direct action trainings, have people participate in actions and identify leaders for demonstrations planned for the weekend. We will also ask organizers coming to town to canvass and do grassroots outreach.

On Saturday, Oct. 11th, there will be a large mobilization march. We expect large numbers for this march, and your participation is key to making this ­happen.­

On Sunday, Oct. 12th, we will be having faith meetings and trainings in preparation for distributed actions which will take place on Oct. 13th.

On Monday, Oct. 13th, we will have a distributed day of action with civil disobedience and major demonstrations at significant targets.