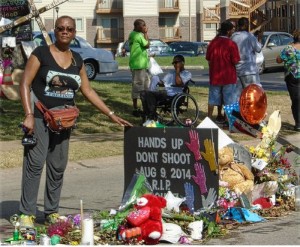 Ferguson, Mo. — Anti-racists from all over the world fighting against police brutality have expressed their solidarity with the embattled African-American community of Ferguson. Many have come to Ferguson since cop Darren Wilson gunned down 18-year-old, unarmed Michael Brown on Aug. 8.

But the core of the organizers of the daily and nightly protests and the overwhelming majority of the participants have been residents of Ferguson and of nearby communities in the St. Louis area. Children have been a large part of all the marches, including young ones who raise their hands with the others and tell the mainly white, heavily armed police, “Don’t shoot.”

I — a managing editor of Workers World newspaper — arrived here on the evening of Aug. 21 with a delegation of journalist-activists, including Workers Assembly organizer John Parker from Los Angeles, People’s Power Assembly organizer Imani Henry from Brooklyn, N.Y., and Lal Rookh, a technical editor of WW. All of us contributed to this report.

The main goal of our trip to Ferguson was to interview people and document events in order to spread the truth of what is really happening to the community. We wanted to help counter the lies that CNN and other corporate media are spinning. Most importantly, we wanted to stand in solidarity with the activists and residents in the area fighting for justice for Michael Brown.

Henry has published a stream of photographs and tweets that readers can find by going to @imanihenry and googling his name for his Tumblr page.

Since there is no one single organizing center for all the actions here, we have attended many separate demonstrations and visited gathering areas to talk with local community activists and people in the political movement. We are all grateful to some of the local store owners and even homeowners who have allowed visitors to take refuge from the heat, as temperatures have reached 100 degrees Fahrenheit and beyond when the humidity is factored in.

I’m writing this report before the Aug. 25 funeral for Mike Brown, which we expect will receive national television coverage, including live stream coverage on cable channels. Since this was the day Brown had been scheduled to begin college — had he not been cut down for no good reason — it is also a national day of college walkouts on many campuses where classes are starting.

Stay in the streets for Mike Brown

The first thing we noticed is that despite the 24-hour, disturbing police presence that Ferguson residents have had to endure since the rebellion erupted on Aug. 10, the community of all ages, but most notably the youth, are showing they are determined to stay in the streets to demand justice for Mike Brown.

On West Florissant Avenue, near where Brown was hit by six bullets, one entering the top of his head, people are always there on the nearby corners with their “Hands Up Don’t Shoot” signs. There is a steady wave of honks in solidarity from cars passing by.

Usually after 8 or 9 p.m. as it grows dark, the police presence is just staggering. The cops set up roadblocks, with police stationed on every corner, including throughout the strip mall and everywhere you look. The police indiscriminately prohibit cars from coming into the area if you are not a “resident.”

We were prevented from driving near the demonstration on Friday night, Aug. 22.  The police forced us to park 10 minutes away from the main location of the demo. When you see the helicopters and surveillance drones shine lights over, on and into the modest houses and apartment buildings, you get a small glimpse of what it feels like for the people of Ferguson to live in a militarized war zone for the past two weeks.

This heavy police presence, however, has not deterred the people from carrying out their nightly marches. That Friday night, when the police kept pushing frustrated demonstrators onto the sidewalk, the youth held an impromptu sit-down. The police constantly tell residents to keep moving, even if they are just talking to each other on street corners.

Even though most of the National Guard have withdrawn from the community, a virtually all-white, St. Louis County police contingent, including those from Ferguson, are still there in full force.

There is an ongoing internal discussion over what tactics will advance the struggle for justice for Brown.  On the one hand, there are the moderate civil rights forces who advocate non-violence and cooperation with the police.  These forces pressure the youth to disperse their protests when the police harassment increases.

On the other hand, there are militant youth and others who want to continue to defy the occupation late into the evening. These forces call for the arrest of Wilson, the cop who shot Mike Brown; for the dismissal of pro-cop St. Louis County Prosecutor Robert McCulloch; and for an end to police repression.

During a NAACP-led march on Aug. 23, which numbered a couple of thousand, the cooperation with the authorities was such that there were actually two uniformed police officers helping to hold the lead banner along with other officers behind them!!!  We were stunned to see this.

Some of us joined near the back of the march, and many people who participated in or observed the event took photos of the poster one of us was carrying: “Resistance is Justified from Ferguson to Gaza,” which indicated the strong political mood among many in Ferguson.

Gov. Jay Nixon did a quick photo-op at the end of the march before being swept away in a SUV with a contingent of cops as an escort.

We found it inspiring to witness numerous examples of the broad solidarity that was being demonstrated with the Ferguson community. People from all over the country and the world have come to Ferguson.  At our hotel, we met reporter Francesca Emanuelle from Telesur, the news agency based in Bolivarian Venezuela, who was covering the struggle in Ferguson for the people of Latin America.

Parker went with Emanuelle to a soup kitchen on the morning of Aug. 23, where they both conducted an interview with a Pakistani man named  Abdul Syed and others at the kitchen.  Later that day we saw Syed wearing a T-shirt expressing solidarity with the people of Gaza — he had seen our sign relating Ferguson to Gaza the night before.

There is also a safe space for demonstrators at St. Marks Church, not far from ground zero of the protests.  We visited this space, where the Hands Up Coalition, a multinational group of activists — Black, white, Asian and Latino/a — from Ferguson and outside of St. Louis take time each day to orient people who plan to go to the nightly protests.  Their orientation includes having street medics explain how to respond to tear gas and other chemical warfare used by the state. They also make available legal observers.

In addition, they provide all kinds of medical supplies, which they encourage people to take with them before going out into the streets.  They also offer food and water and most importantly, refuge for people who want to escape the repression.  It is very, very impressive.  This space has been raided by the police when no one was there.

What was encouraging is that there were not only whites present from the progressive movement around the country, including activists from the Occupy Wall Street movement, all of whom have been standing in solidarity with Ferguson, but also supportive white people from the surrounding communities. Some white youth joined the NAACP march.

We met a white woman along with her three African-American children following the NAACP march.  She told us she was ashamed that her immediate family supports Darren Wilson, the cop who executed Mike Brown.  She was carrying a sign that said, “White people support the Brown family.”  Such sentiments, in an area where you can cut the attitude of white supremacy with a knife, should be viewed as very progressive if not revolutionary.

Keep in mind that a few days ago a 23-year-old Black man, Kajieme Powell, was fatally shot at least nine times by St. Louis police. This brutal killing was videotaped and posted on the Internet.

At one of the demonstrations, I met a family of Somalis who live close to Ferguson.  When I interviewed the mother and daughter, they referenced Michelle Alexander’s book, “The New Jim Crow,” which explains how young Black men are systematically targeted for racial profiling.

We found a generalized solidarity with Mike Brown among area Black workers. When I rented a car to get us around town, the Black worker at the counter asked why we had come to St. Louis. Recognizing us as allies, he told me that he and his fiancee had gone to a number of protests for Mike Brown. We got the best discount available.

Housekeepers and maintenance workers at the hotel where we stayed spoke openly about the injustices they have faced with the police. They told us why justice for Mike Brown is so important.  One housekeeper, a young single mother with two children, spoke of the difficulties of surviving on $8.25 an hour with no benefits. She said workers have a union at only one of St. Louis’ many hotels.

We spent all day Friday with Robert, a 20-year-old who was carrying a Mike Brown sign near the airport hotel where we are staying.  He spoke for the record of his experiences participating in the rebellion and what Black youth are going through just trying to survive.  He said that what is needed is a national march in Ferguson like the 1963 march on Washington, where hundreds of thousands gathered for Dr. Martin Luther King’s “I have a dream” speech.

I have to give a special shout out to a burger restaurant that has been especially friendly to protesters and the progressive press. The owners are a married couple who not only serve great food but have allowed people to use their bathroom, do computer work and others just needing to get out of the oppressive heat.  That’s how they showed their solidarity.

The people of Ferguson were very friendly to us and appreciated our show of solidarity. We distributed the last issue of Workers World newspaper to many individual activists we held discussions with, the special issue highlighting Ferguson. Some readers from the region were especially interested in our commentary on the St. Louis elite class.

The community of Ferguson has made it clear that they will not rest until there is real justice for Michael Brown and beyond. It will be up to the progressive movement nationally, including those with a revolutionary viewpoint, to help develop a strategy to assist the local movement in Ferguson and the growing national movement against the militarized terror of the police and the state in general.

On the last day of our trip, we visited the very spot at the Canfield Green Apartments, where Michael Brown was shot by Wilson.  There we saw several moving memorials both in the street and near a tree.  Many people either walked or drove by to take photos.  Several police vehicles drove by.  Our delegation left a placard calling for justice for Brown and all victims of police terror and a WW newspaper.   One young Black male resident there told us that the best way to honor Michael Brown was to fund jobs and recreation centers, not the police.