Oakland, Calif. — Some 5,000 determined protesters marched almost a mile and a half from the West Oakland Bay Area Rapid Transit station to the SSA Marine terminal in the Port of Oakland on Aug. 16. The purpose of the event, called “Block the Boat for Gaza,” was to prevent the cargo of the Zim Piraeus, a ship of the apartheid Israeli Zim shipping company, from being unloaded at the Port of Oakland.

“Zim Lines is the largest Israeli shipping company, and it’s a huge flow of capital for the state of Israel,” said Lara Kiswani, executive director of the Arab Resource and Organizing Center, one of the leading organizations in the large coalition endorsing the event.

The Zim Piraeus was originally scheduled to be unloaded at the Port of Oakland that Saturday morning at 5 a.m. However, due to the planned blockade, on Friday night the Zim ship slowed to a stop around Santa Cruz, Calif., roughly 70 miles by sea from the Port of Oakland on San Francisco Bay. When it was clear the ship would no longer make their original schedule, protesters rescheduled their plans from an early morning blockade to one on Saturday afternoon, during the longshore workers’ second shift.

By the time the march was heading for the port, it was apparent that the Zim Piraeus was still dodging the blockade at sea and would not be docking that day. 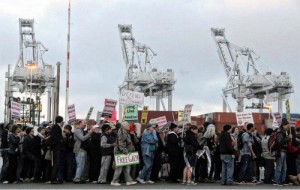 Protesters began chanting “We blocked the ship!” They also chanted, “Occupation is a crime! From Ferguson to Palestine!” tying in the struggle of the Palestinians against Israeli occupation to that of the struggle in Ferguson, Mo., where the community is still reeling from the police killing of Michael Brown, a young, unarmed African American.

When they reached the berth at SSA where the Zim would have been tied up, the protesters were met with a large and menacing police line across the entire driveway where the longshore workers enter to work the ships. Spontaneously, the crowd marched square up to the police, raising their hands in the air and chanting “Hands up! Don’t shoot!” to indicate support for the African-American community in Ferguson.

In a victory statement, AROC announced, “Our actions today have sent a clear message that genocide and apartheid do not pay in Oakland, or anywhere on the West Coast. Our action, along with the 100′s of 1000′s of people who mobilized worldwide in solidarity with the resilient Palestinian people, should send a clear and resounding message that the beginning of the end for the Zionist apartheid regime in Palestine is upon us. As South African apartheid fell, Zionist rule in Palestine and Israeli apartheid will fall.” (araborganizing.org, Aug. 17)

Blocking the ship for two longshore work shifts on Saturday was historic. The number of participants was far greater than during the first Zim blockade in Oakland, which was held in 2010 in response to Israel’s attack on a Gaza aid flotilla ship, the Mavi Marmara. International Longshore and Warehouse Union Local 10 passed a resolution at that time condemning the attack on the aid flotilla.

This time, the Zim ship finally stopped doing “donuts” outside of Monterey Bay and started heading slowly up the Pacific coastline to San Francisco on Sunday, Aug. 17. It looked like the Zim ship could make port in time for the afternoon shift.

The blockade organizers, determined that they could block the ship from being unloaded one more time, made a quick call out for support. Within an hour, almost 400 people arrived at the port.

The AROC statement notes that “[ILWU] workers honored our picket and stood on the side of justice, as they historically have. Oakland said no to Zionism and blocked the boat for an entire weekend. This is the first time in history that this has happened. Israeli apartheid is falling one port at a time! Palestine will be free from the river to the sea. Long live international solidarity and the struggle for liberation!”

Solidarity actions were held on Aug. 13 in Long Beach, Calif., where they plan to do their own blockade on August 30 (tinyurl.com/l5kxa8a), and on Aug. 16 at the Israeli Consulate in New York City and in downtown Miami. Blockades are also being planned in the Washington state ports of Tacoma and Seattle. (seetinyurl.com/mh62gbw).