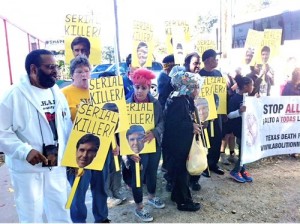 Houston — For the 14 years that Rick Perry has been governor, he has committed crimes against the people of Texas with impunity. So it was almost laughable when he was indicted on Aug. 15 for two felony charges that most of the people in Texas have never heard of and are not impacted by.

What a grand jury has never investigated are Perry’s closure of almost every women’s health clinic in the state, his refusal to use federal money to expand Medicaid and his brazen authorization of 276 death row executions.

These are his serious crimes that directly affect the lives of millions, causing immeasurable pain, physical and psychological suffering and death. These crimes that Perry has committed against working-class people and particularly African Americans, Latinos/as and women of all nationalities in Texas are not on the Sunday news shows or any bourgeois national news programs.

The charges in this case are abuse of official capacity, a first-degree felony, and coercion of a public servant, a third-degree felony. If ever convicted, he could receive a maximum sentence of 109 years in state prison.

Perry threatened the Austin DA with a veto of funding for her office if she refused to resign after being convicted of drunk driving.  Legal experts say that Perry had the right to veto funding but not to publicly threaten the DA into resigning. The Travis County PIU was conducting a potentially damaging investigation into a medical research institute that has been one of Perry’s favorite avenues for grants and jobs.

Since Perry signed into law last year a bill that severely restricts a woman’s right to abortion as well as other medical care dealing with women’s reproductive health, Perry has used this reactionary feat to bolster his ratings among conservatives. He has stated that his goal is to make abortion, at any stage, a thing of the past.

The last provisions of Texas’ anti-choice legislation go into effect in September. If legal challenges fail, Texas may have only six clinics left where women can have an abortion. Over 12 million women living in 268,000 square miles in Texas and they will have six clinics! This is criminal.

Perry has made clear that he will go to great lengths to protect an unborn fetus, but he cares little about the real children born in the state.

One in four (6.2 million) Texans are uninsured, the highest rate of any state, yet Perry has refused to accept federal money to expand Medicaid. Medicaid expansion would cover more than one million new low-income Texans by 2017, according to the state Health and Human Services Commission.

Perry refuses to expand Medicaid despite the federal government covering 100 percent of the costs for the first three years and 90 percent after that. But Perry has chosen his political aspirations over people’s lives.

If anyone else ever authorized the killing of 276 people, they would be indicted for mass murder. Perry has presided over more executions than any governor in the history of the United States. Texas leads the country with 515 executions and over half have been under Perry’s reign.

With all the recent news of botched executions, with drug companies refusing to let their drugs be purchased for killing people, with innocent people being exonerated off death rows around the country in greater and greater frequency, we can say with certainty that the system of capital punishment is broken and cannot be fixed.

While Texas has exonerated 12 of the 143 people released from death row because they were proven innocent, we will never know the true number of innocent people already executed.

In early August, a new report by the Washington Post thoroughly discredits the last piece of evidence used to convict Todd Willingham of setting his house on fire to kill his three daughters: testimony by jailhouse snitch Johnny Webb, who testified that Willingham admitted his guilt while in the county jail awaiting trial. The prosecutor had insisted that he made no deal with Webb. But, according to a lengthy paper trail and the informant himself, Webb was indeed coaxed and actually paid to testify against Willingham.

Willingham was executed in 2004 despite a report on Perry’s desk by a prominent arson expert and scientist stating the fire was not intentionally set, and therefore, there was no crime. Perry ignored the facts, calling Willingham a monster (because he listened to heavy metal music and had Metallica posters on his wall) and allowed his execution to proceed.

Members of the Texas Death Penalty Abolition Movement have discussed Perry’s indictments and their responses ranged from joy that he could go to prison to pessimism that he would be able to worm his way out of the charges.

But one thing they agreed on was that not only was Perry a criminal, but the favorite sign of those protesting executions in Huntsville, Texas, was the one resembling a wanted poster reading “Rick Perry — serial killer!”