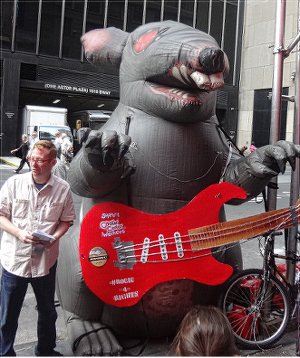 New York — Scabby the Rat made an unusual appearance on 44th Street west of Broadway on Aug. 8, with a guitar slung across his chest. He was staring at the entrance to the Guitar Center, the largest musical instrument retailer in the U.S., with 315 stores and 10,000 workers. The union rat is usually a sign of labor struggle, and this time was no exception.

On Aug. 5, Richard Trumka, the head of the AFL-CIO labor federation, accused Guitar Center ownership of using “shameful” tactics to avoid signing a contract with the unionized workers.

“The fight against Bain Capital and Ares Management for fair pay and decent health care for the Guitar Center workers is what the labor movement is all about,” Trumka said at RWDSU’s convention in Orlando, Fla. “The dirty tactics of Bain and Ares have been shameful and ugly. I want every Guitar Center worker to know the entire AFL-CIO and every one of our affiliates stand behind them in their efforts to win a fair contract.”

The RWDSU has filed unfair labor practice charges with the National Labor Relations Board, alleging that Guitar Center has stalled in bargaining talks and “punished” workers who voted in favor of representation.

The union now alleges that Guitar Center management has made a show of addressing workers’ grievances — but only at the company’s 312 non-union stores. In a letter to the labor board, union spokespeople insisted that the company was “punishing the RWDSU represented employee[s] for joining the Union.” (Huffington Post, Aug. 5)

The leaflet workers handed out near the guitar-wielding rat asked passersby to call Guitar Center corporate headquarters at 818-735-8800 and “tell CEO Mike Pratt that you’re a Guitar Center customer and you think the workers deserve a fair contract, or tweet him @GuitarCenterCEO.”