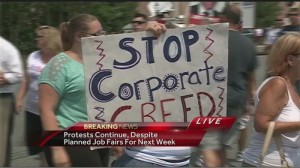 Thousands of workers at 71 Market Basket stores in New England have been engaged in a job action since July 17, when a hostile takeover within the company’s board ousted the then current CEO, Arthur T. Demoulas. The mostly white super­visory and managerial staff of the grocery chain has been organizing weekly rallies of thousands of workers, their families and supporters demanding that the fired CEO be restored along with the benefits and bonuses that go only to full-time, mostly managerial staff.

Not surprisingly, the Boston Globe and local television stations have been “explaining” the job action as a plea by disgruntled workers to have their benevolent and “fatherly” CEO restored as head of the company.

But, as usual with the corporate-owned media, there is much more to this story that is not being told. The overwhelming majority of the 27,000 workers involved are part-time immigrant, Latino/a and African-American baggers, cashiers, stockers and deli clerks making $8 an hour. They receive no benefits, no holiday or sick pay and must obtain their own health insurance through the states’ Medicaid websites. Their hours have been cut back to one day a week.

According to dozens of these workers that WW talked with in the Somerville, Mass., store, none of the striking and anti-union managers are organizing the part-timers to even be aware of their rights. Few, if any, part-time workers get the much ballyhooed bonuses that the managers do, but even this is gross exploitation since the base salaries stay at near minimum wage levels despite the bonuses. Market Basket is also notorious for taking advantage of the Fair Labor Standards Act, which allows for workers as young as 14 to be hired.

The Market Basket board of directors is soliciting bids to buy the company and stands to make billions of dollars in profits (unpaid wages) if they are successful. They have already taken $300 million in retirement funds from workers and diverted it to the board. They have also declared that all protesting workers would be terminated by Aug. 4 and are organizing “job fairs” to hire scab replacement workers. Market Basket workers have picketed that operation and few have applied for jobs, according to press reports.

Joe Hansen, president of the 1.3 million member United Food and Commercial Workers Union, issued a statement of solidarity and UFCW Local 1445 is reaching out to the part-time work force. UFCW has been organizing a low-wage worker campaign at Walmart for over a year, fighting to improve the same kind of working conditions for Walmart workers.

Local residents in communities served by Market Basket are boycotting the stores, which have not sold dairy products or fresh produce for weeks. Members of the multinational working class who normally shop at Market Basket for their low prices and wide variety of food are boycotting stores during this job action and at least one local community support committee is being organized.

Gerry Scoppettuolo is a former member of UFCW Local 1557 in Nashville, Tenn.