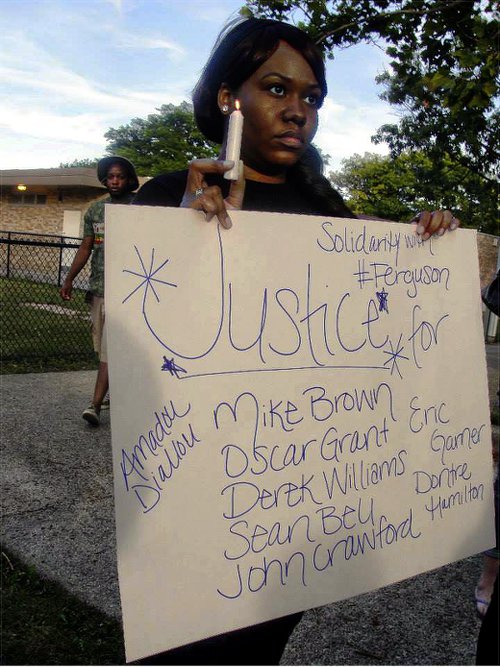 A national call was issued to hold vigils and demonstrations to demand justice for Michael Brown, the 18-year-old unarmed African American who was shot multiple times and killed by police officer, Darren Wilson, on Aug. 9 in Ferguson, Mo.  At least 90 U.S. cities held protests on Aug. 14 against this horrific execution — witnessed in broad daylight — in solidarity with Michael Brown’s family and the Ferguson community, which has been under police occupation since Aug. 10.  Workers World will be reporting and providing updates on these protests.  The People’s Power Assembly has issued an online petition demanding the following from Missouri and federal officials:  justice for Michael Brown; end the police occupation; arrest and charge police officer Darren Wilson with Brown’s murder; and unconditional amnesty for those arrested and detained since Aug. 10, 2014.  Go to tinyurl.com/kk5a5ug to sign the petition and help get it circulated widely.

Between 5,000 to 10,000 people rallied in Union Square, New York City, with many then marching to Times Square.  The New York Police Department arrested at least a dozen people, including Black bystanders and Occupy Wall Street activists.  Other protests took place in Harlem and Brooklyn.

A crowd of several hundred gathered at the Old Courthouse Square in Decatur, Ga., a suburb of Atlanta, last night, organized largely through Facebook by a young Asian woman and her friends. All the local TV stations were there and had reports on the 10 p.m. and 11 p.m. news. People brought signs reading “Black Lives Matter” and others had the names of Michael Brown and others killed by police.

Dozens of people spoke, some recounting their own close calls with police. While it was a predominantly Black and young crowd, it was also multinational and multigenerational with families with young children and older folks, all united in their solidarity with the need to end police violence. Several of the speakers made reference to that demand. At dusk, candles were lit. At the end, a number of people marched through the streets of downtown Decatur.

Dozens of community members from across the city of Milwaukee and beyond participated in an August 14 vigil in Dineen Park protesting the police execution of Michael Brown and other similar cases nationwide. Participants at the vigil also spoke out against numerous instances of police brutality and murder in the Milwaukee metropolitan area. Another protest is scheduled for Aug. 17 at 3 p.m. in Red Arrow Park.