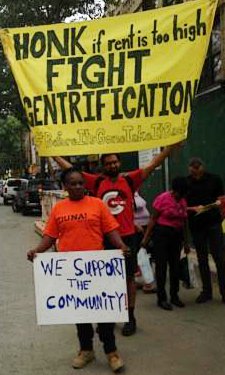 The Equality for Flatbush Project held a “Save Affordable Housing/Fight Gentrification Visibility Day” on July 19 to demand an end to rising rents. The community group, which describes itself as “a new people of color-led grassroots campaign to create a stronger network between tenant rights groups, block associations and community organizations fighting for better conditions for Flatbush and East Flatbush residents,” does grassroots anti-police repression, affordable housing and anti-gentrification organizing in Brooklyn. Visit facebook.com/EqualityForFlatbush.

Walking and filming along busy Flatbush Avenue, participants asked passing drivers to “honk if the rent’s too high” and handed out flyers about the group’s project, “Before It’s Gone/Take It Back,” a documentary art and resource website that E4F has been fundraising to build. (facebook.com/BeforeItsGoneTakeItBack) The group also took a solidarity ride in a dollar van, an example of local Caribbean businesses, this one created in response to the lack of adaquate public transportation in the area. E4F reports that there has been an upsurge in police harassment and ticketing of dollar van drivers.

Activists came from the Brooklyn Community Pride Center as well as the Prospect Park East Network, which has been fighting the construction of a massive 23-story Hudson Companies luxury housing complex. Rent for studio apartments there will start at an outrageous $2,000 a month.