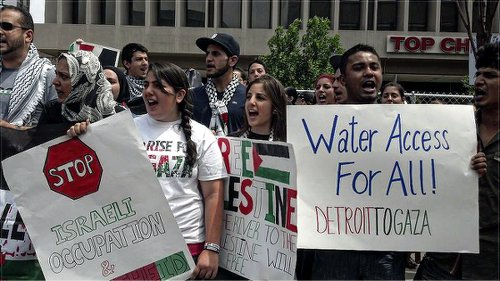 July 21 — The Detroit Water & Sewerage Department announced at a federal bankruptcy court hearing before Judge Steven Rhodes today that there would be a 15-day suspension of water shutoffs while policies were enacted to address the current crisis in the city. Additional measures are purportedly being designed to address the massive termination of water services for thousands of households in this economically distressed majority African-American city.

This declaration in federal court from the DWSD culminated a week-long series of events that focused national attention on the plight of working and poor people in Detroit. A mass demonstration through the downtown financial district on July 18 attracted thousands representing local organizations, National Nurses United and delegates of the Netroots Nation conference held at Cobo Conference Center July 17-20.

During the objections hearing on July 15, Kris Hamel, representing the Moratorium NOW! Coalition, introduced the question of the water shutoffs into the federal bankruptcy proceedings for the first time. Over 600 rank-and-file people had filed objections to the so-called “plan of adjustment” submitted by Emergency Manager Kevyn Orr, which would slash pensions, privatize public assets and create conditions for the long-term disempowerment of city residents.

Hamel called upon Judge Rhodes to declare a moratorium on the water shutoffs, noting that the terminations had drawn condemnation from the United Nations and other organizations locally and nationally. Rhodes then ordered Jones Day law firm, which is administering the affairs of the city under EM Orr, a former partner in that firm, to compel the DWSD to come to court and explain its program to prevent shutoffs.

After the presentation and questioning of Darryl Latimer, the DWSD deputy director, Rhodes ordered him to return on July 21 with more detailed plans to assist residential customers facing shutoffs. Rhodes noted that the shutoffs have been an embarrassment to the city and were “bad for the bankruptcy.”

Also at the July 21 hearing it was announced that a class-action lawsuit has been filed in the bankruptcy court demanding a moratorium on the shutoffs, saying that the actions by DWSD at the aegis of EM Orr represented a violation of due process. Plaintiffs in the filing included victims of the water termination actions, along with the Moratorium NOW! Coalition, the Michigan Welfare Rights Organizations, the People’s Water Board and the Michigan Chapter of the National Action Network.

The letter read in part: “We ask that DWSD immediately cease terminating services and restore water to the thousands of customers who are currently without this basic necessity. We urge DWSD to restore water service immediately to avoid further harm to the City’s most vulnerable citizens, the vast majority of whom are African American, and to place a moratorium on plans to discontinue water service pending the development of a review-and-implementation plan that is based on accurate infomation, that is staffed sufficiently for effective implementation, and, ultimately, that is humane.”

Demonstration in solidarity with people of Detroit

The social and political situation in Detroit gained renewed national and worldwide attention July 17-20 during the Netroots Nation conference, which brought together progressives, labor unions and left-wing Democrats who are heavily focused on blogging, video streaming and a myriad of social media networks.

Officials of National Nurses United, which represents 188,000 U.S. health care professionals, were strong participants in the conference. They contacted the Moratorium NOW! Coalition and other local groups about lending assistance to the struggle against water shutoffs, emergency management, privatization and the city bankruptcy. Moratorium NOW! organizers immediately suggested that delegates from the conference come into the streets for a mass demonstration in solidarity with the people of Detroit.

Through the work of the NNU, endorsements were secured from the Detroit Metro AFL-CIO, United Auto Workers Local 600, Amalgamated Transit Union Local 26, Communications Workers of America and a host of other labor organizations.

On the afternoon of July 18, thousands marched from Cobo Center through the financial district, passing the Coleman A. Young Municipal Center, to Hart Plaza for a rally where they heard from over a dozen speakers. This action was the tenth consecutive week of “Freedom Fridays” organized by the Moratorium NOW! Coalition, with rallies and demonstrations outside the federal courthouse and later the DWSD headquarters, which then spread into other areas of the downtown financial district.

The July 18 demonstration received national and international coverage. Earlier in the day the second blockade at Homrich, the private contractor hired by the EM to assist in water shutoffs, took place, resulting in nine arrests. Among the arrestees was S. Baxter Jones, a Moratorium NOW! activist who uses a wheelchair.

The NNU issued a statement at the rally declaring the city of Detroit as a “Public Health Emergency Zone” in light of the water shutoffs. The declaration read: “As registered nurses, we are compelled to advocate for all our patients, whether at the bedside or in our neighborhoods and communities. … We demand an immediate end to all water shutoffs. We demand an end to the disgraceful practice of city officials who have removed children from homes where water has been shut off. And we demand the guarantee that all Detroit residents have immediate and full access to clean water.”

Abayomi Azikiwe co-chaired the July 18 rally at Hart Plaza and addressed a plenary at the Netroots Nation conference on July 19 dealing with the water crisis in Detroit.