July 15 — People from all around the world and some governments have rallied to the side of the Palestinian people in Gaza, who are under relentless attack from the U.S.-armed Israeli state. Here is a small sample of what has been taking place worldwide. (Also see report on Africa on page 10.) 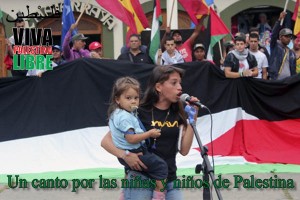 From Venezuela, speaking from a People’s Power Assembly in Yaracuy state, President Nicolás Maduro said, “They want to exterminate the Palestinian people to remove them from the last inch of their territory. The concept that the corrupt Israeli government works by is extermination, because its war aims at making a people disappear. Venezuela stands with Palestine.”

Legislators in Venezuela called for a protest demonstration against the Israeli attacks for July 14, following a gathering by popular organizations on July 10. (correodelorinoco.gob.ve)

In Buenos Aires, Argentina, protesters in solidarity with Palestine held a demonstration in front of the Israeli Embassy on the afternoon of July 14. 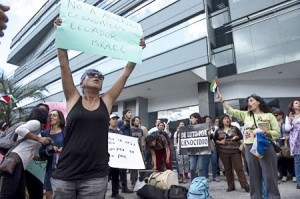 The same day in Quito, the capital of Ecuador, some hundreds demonstrated in front of the Israeli Embassy. A placard called for no economic agreements between Ecuador’s government and Israel.

The Palestine-Nicaragua Solidarity Committee, which includes many people from the Palestinian community living in Nicaragua, the Nicaraguan government and other community organizations, mobilized on July 14 to stand in solidarity with the heroic Palestinian people. They condemned Israeli genocide in Gaza and demanded that the criminal attacks stop immediately. (Georgio Trucci, nicaraguaymasespanol.blogspot.com)

Pro-Palestinian organizations in El Salvador demonstrated in front of the building housing the Israeli Embassy in San Salvador, the capital. The demonstrators carried Palestinian flags, photos of victims of the bombing in Gaza and placards with slogans like “Israel is terrorist” or “Israel murderers.” They also painted similar messages on the sidewalk in front of the building. (noticias.terra.com, July 14)

In Mexico’s capital city on July 11, social organizations, unions, students and community organizations used social media for a Coordination in Solidarity with Palestine. They gathered in front of the Secretariat of Foreign Relations to demand an end to the genocide in the Gaza Strip and that the Mexican government speak out against the bombardment of the Palestinian people. (somoselmedio.org, July 11)

Led by a banner that read, “Silence is complicity,” some 1,000 people, many from Chile’s Palestinian community, marched July 12 through the center of Santiago, the capital. They demanded an end to the occupation of Palestinian territories. (elnuevoherald.com, July 12)

In France, the European country with the largest number of Arabs, some 10,000 people demonstrated July 13 in solidarity with the Gaza Palestinians. A group carried an enormous Palestinian flag, while others chanted, “Israel, stop killing children.” (diariolasamericas.com)

On July 11, demonstrators in Athens, Greece, gathered in front of the Israeli Embassy. A report from the Federation of Greek Women says their organization’s demands were:

• Stop the continuous air raids against the people of Palestine.

• The Israeli army of occupation and the settlers must abandon the occupied Palestinian territories.

• Release all the political prisoners from Israeli jails and let all the Palestinians return to their homes.

• Cancel the military drills, as well as all agreements of military cooperation with Israel.

• We call for an independent, viable, fully sovereign Palestinian state within the 1967 borders, with  East Jerusalem as its capital.

Demonstrations in solidarity with Gaza took part or were scheduled in all regions of the Spanish state, from Bilbao in the Basque Country to Santiago de Compostela in Galicia to Barcelona in Catalonia and in the Canary Islands. On July 14, some 500 people of different nationalities filled the area near the Israeli Embassy in Madrid, the capital, in a demonstration. The protesters chanted, “Long live the struggle of the Palestinian people!” and “You Zionists are the terrorists!