July 14 — There is worldwide opposition to Israeli Defense Force attacks against the Palestinians in Gaza and other regions in the occupied state. “Operation Protective Edge,” an aerial and ground incursion, has killed nearly 200 Palestinians and injured hundreds more.

Gaza’s Deputy Health Minister Dr. Yousef Abu Reesh reported at a July 14 press conference at Shifa Hospital, “The very high rate of casualties, either killed or wounded due to the Israeli assaults, was a result of missiles fired from war planes, artillery bombs fired from tanks and bombs fired from the sea.” (Xinhua, July 14)

In “The Calamity in Gaza and the West Bank,” Duarte states the ANC’s condemnation of Israeli police and military repression. Thousands of similar articles have been published worldwide in solidarity with the Palestinians. 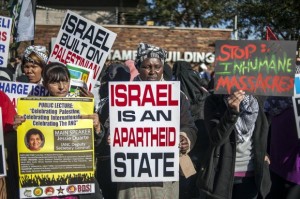 According to Duarte, “While Israel says it fights Hamas because it is a terror organization that does not recognize its existence as a Jewish state, it unleashes the same violence on virtually any Palestinian. It practices ruthless collective punishment. It opposes unity among Palestinians ostensibly because this includes Hamas, but it acts just as harshly against other political movements in the Palestinian territory.”

Duarte explains the “latest escalation of violence against the Palestinians comes … since they established a unity government, which was then recognized by many world governments,” to Israel’s chagrin. “Hamas has become a convenient explanation for indiscriminate violence visited on Palestinians before unity efforts.”

Duarte asks why the international community has remained mute. “The U.N. Secretary General [called] for restraint from both sides, even though evidence clearly shows Israel’s disproportionate use of crude force. Palestine has no serious army, no air force, and no serious weapons of war. Rockets that land on the Israeli territory cannot be compared to heavy war technology that Israel deploys with impunity on residential areas that have become legitimate military targets.”

Western imperialist countries support Israel, an outpost for imperialist domination of the Middle East. Therefore, neither European or North American governments have issued sanctions or diplomatic reprisals against Israel.  U.S. corporate media justify Washington’s funding of Palestine’s occupation and the forced removal and persecution of its people.

On July 11, the ANC Youth League called for Israel’s diplomatic and economic isolation. Its call agrees with the international movement calling for sanctions on Israel for its refusal to recognize the Palestinians’ right to an independent, sovereign nation.

In the ANCYL statement, Dr. Bandile Masuku emphasizes, “ We support the call made by our Western Cape Province comrades and call on the Department of International Relations to immediately expel the Israeli Ambassador to South Africa, Arthur Lenk, and to recall Comrade Sisa Ngombane from Tel Aviv. … SA must deny the State of Israel any formal recognition.

“The Department of Trade and Industry must not allow Israeli goods from an apartheid state in this country. We support a complete Boycott, Divestment and Sanctions program against the Zionist State with immediate effect.” (ancyl.org.za)

The Congress of South African Trade Unions, the country’s largest labor federation, reprinted the Palestine Solidarity Campaign in South Africa’s appeal: “Gaza has become a field laboratory for the Israeli and U.S. military-industrial complex. The latest and most vile weapons and high tech equipment [are] field tested on the bodies of Palestinian men, women and children before being sold to other countries.” (July 11)

COSATU stresses, “Israel will continue with its barbarism. The world needs to stand up to apartheid Israel as it stood up against apartheid South Africa. The time for easy rhetoric and mere condemnation alone is over. Genuine global solidarity is required — a basic lesson of our own struggle against apartheid.”

In a July 10 COSATU press release, National Spokesperson Patrick Craven says “Israel … commit[s] all these ruthless atrocities because of the license from the U.S., European Union and allies. The U.N. must be ashamed of itself for failing humanity and the people of Palestine, always pleading for restraint from the victim, equally.

“We cannot equate an aggressor to a victim or colonizer to a colonized. Nelson Mandela was also called a terrorist for fighting for freedom, hence the natural task of oppressed people to wage a liberation struggle and our natural responsibility is to support them.”

Mandela defended the ANC alliance with the Palestinians as well as Cuba, Libya and other revolutionary and progressive forces worldwide. A broad Palestine Solidarity Campaign continues to push for the Israeli regime’s isolation.

After the wars in 1967, 1973 and 1982 between Israel and regional governments, including Egypt, Syria and Lebanon, and people’s organizations, many African countries broke diplomatic ties with Tel Aviv. However, since the fall of the Soviet Union, the Eastern European socialist governments and the 1993 Oslo Agreement, Israel has re-established relations with many African Union member-states.

To maintain its position against racism and national oppression, the AU must firmly support Palestinian statehood and sovereignty. The ANC and other progressive forces should set the standard for the continent’s foreign policy toward Israel’s war on Palestine.