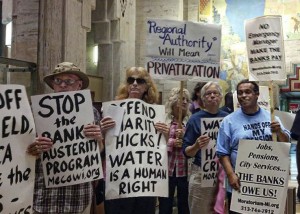 After picketing the Detroit Water and Sewerage Department building on June 13 to demand the end of water shutoffs to thousands of Detroit households behind in their bills, “Detroit Freedom Friday 6” participants boldly marched through downtown to Bank of America. Chanting, “Make the banks pay, not the retirees!” the protesters entered the historic Guardian Building and headed up the stairs to the mezzanine, where BOA employees grinned as a loud, boisterous picket line took place in front of the low-paid tellers.

City of Detroit retirees, as part of the state-imposed municipal bankruptcy, are being asked to take huge cuts to their pensions, health care and other hard-won benefits and accrued wages. The night before, the Detroit Light Brigade hit various targets around the city, illuminating messages like “Shutoffs kill” in front of city hall and other locations.

The U.S. Department of Justice on June 9 rejected as inadequate a $12 billion offer by BOA to settle claims of mortgage fraud. According to Moratorium NOW! Coalition organizers, Detroit is the city most affected by this BOA fraud, especially Countrywide’s subprime and predatory lending practices. The coalition says Detroit is entitled to a large payout as restitution for the approximately 100,000 home foreclosures which occurred from 2005 to 2010. Instead, the city is actually paying BOA $42.5 million on top of the $300 million already paid to it for interest rate swaps which allowed the bank to profit from the destruction of the city.

A leading coalition activist told Workers World, “They profited from their own fraud in Detroit. At least $1 billion is owed to Detroit by Bank of America alone, which is more than the so-called ‘grand bargain’ being trumpeted in the corporate media as the solution to Detroit’s crises. This racist plan relies on corporate charity (‘charitable contributions’) from many of the same corporations and their foundations which also owe reparations to the city, as well as a meager contribution from the state, which helped bankrupt the city by withholding revenue sharing, and the fiscal takeover of Detroit for 20 years.”